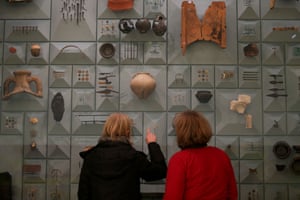 Bloombergs European headquarters, designed by Lord Norman Foster, stands on one of the richest archaeological sites in London by one estimate a 10th of the Roman objects on display in the Museum of London come from a century of excavations on various patches of the land. Much was destroyed by the excavations of deep basements of later buildings, but where the archaeological layer survived, the soggy ground led to startling preservation, includinghundreds of wooden tablets faintly preserving the oldest handwritten documents ever found in Britain, from the first years after the Roman invasion, including the first recorded use of the world Londinium.

Michael Bloomberg, the founder of the company, said they were stewards of the ancient site and its artefacts. London has a long history as a crossroads for culture and business, and we are building on that tradition.

The Mithraeum incorporates a new daylit art gallery at ground level with an opening installation, Another View from Nowhen, by the Dublin artist Isabel Nolan. A huge glass case displays more than 600 of the 14,000 objects found on the site, including a wooden door, a hobnailed sandal, a tiny gladiators helmet carved in amber, and a wooden tablet with the oldest record of a financial transaction from Britain.