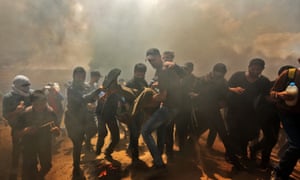 Fury and desperation at Trumps December declaration on the embassy helped to ignite the six-week protest movement. To international condemnation, Israeli snipers have regularly fired on demonstrators in past rallies. Mondays shootings raised the total deaths close to 100 and made it the bloodiest day in the coastal enclave since the 2014 war.

Donald Trump,who had tweeted that Monday was a great day for Israel, did not attend the embassy opening but spoke in a video message, saying he extended a hand in friendship to Israel, the Palestinians and to all of their neighbours. May there be peace.

Amnesty International criticised the bloodshed as another horrific example of the Israeli military using excessive force and live ammunition in a totally deplorable way.

At the ceremony in Jerusalem, Washingtons ambassador to Israel, David Friedman, stood on a stage painted with the US flag and said:Todays historic event is attributed to the vision, courage, and moral clarity of one person to whom we owe an enormous and eternal debt of gratitude: President Donald J Trump. The crowd cheered and gave a standing ovation.

The only direct reference to the bloodshed came from Trumps son-in-law, Jared Kushner, who said: As we have seen from the protests of the last month and even today those provoking violence are part of the problem and not part of the solution.

In Washington, the White House deputy press secretary Raj Shah was repeatedly challenged to condemn the Israeli response. We believe Hamas is responsible for these tragic deaths, he told reporters. Their rather cynical exploitation of the situation is whats leading to these deaths and we want it stopped.

Israel has portrayed the protests as a terrorist ploy by Hamas. Naftali Bennett, Israels education minister, told Israel Radio that anyone who approached the fence would be considered a terrorist. A foreign ministry spokesman labelled protesters murderous rioters.

The army said it had almost doubled the number of troops surrounding Gaza and in the occupied West Bank on Monday.

The Israel Defence Forces said in a statement: The rioters are hurling firebombs and explosive devices towards the security fence and IDF forces, and are burning tires, throwing rocks and launching flaming objects in order to ignite fires in Israeli territory and harm IDF troops.

Israels military said its troops had killed three terrorists attempting to place an explosive device adjacent to the fence in the southern area of the strip under the cover of violent riots.

Hamas has encouraged and funded the protests and said it would not stop people from attempting to break the metal fence. Loudspeakers at the frontier called for people to push through as Israeli drones dropped teargas on the crowds.

Until this week, no Israeli had been harmed since protests began on 30 March. An IDF spokesman, Lt Col Jonathan Conricus, said one soldier had been slightly wounded by shrapnel on Monday but he did not have details on the source of the injury.

No one had crossed the fence despite several attempts, Conricus said. Our troops have not taken any sustained direct fire, he added.

Protest organisers have called for an end to a decade-old Israeli-imposed blockade, and for Palestinian refugees and their descendants to be allowed to return to their ancestral homes.

Mosques in Gaza called for people to protest as a general strike was observed. Buses ferried residents to the perimeter. Black clouds billowed from piles of burning tyres which organisers say are used as a smokescreen against Israeli snipers. People have been shot tens of metres from the fence.