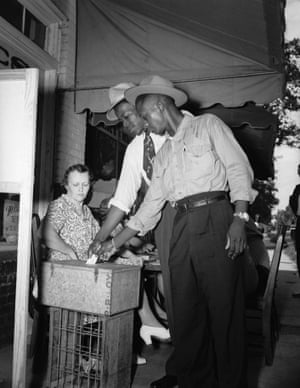 African American men vote for the first time since 1890 in the 1946 Democratic primary. Photograph: Bettmann/Bettmann Archive

The researchers looked at more than 1,000 Alabama felons who had completed any prison terms and periods of probation or parole to which they had been sentenced. They found that about 75% of them still owed legal financial obligations, meaning they could not regain the right to vote even if they would otherwise be able to do so.

Marc Meredith, an associate political science professor at the University of Pennsylvania, was one of the studys co-publishers. He said in a phone interview last month that Alabamas policy requiring the payment of fines, fees and restitution prior to the restoration of voting rights has had a significant impact on the electorate in the state.

People should be aware of the share of people disenfranchised by policies like this and how much money people have to pay before they can get their voting rights back, he said. Even with people who are 15 years removed from their conviction, the majority of them cant vote because of their financial obligations.

And black felons are 9.4% less likely to be eligible to vote in Alabama because of outstanding fines, fees and restitution, according to the June study in the Journal of Legal Studies.

Alexandria Parrish, an attorney with Evans Law Firm in Homewood, has years of experience representing clients who have been criminally disenfranchised. She sees the practice as a way to keep poor and black people away from the ballot box.

Theyve got so many ways of skinning a cat, and I think most of it is to keep people from being able to vote so they can vote their own people in, she said. This is like Jim Crow 2.0. They can keep them from voting.

Deuel Ross, assistant counsel at the NAACP Legal Defense and Educational Fund in New York, said that the fact that Alabama links voting to the ability to pay has a disparate impact on black felons that indirectly suppresses the vote of African Americans who are not felons.

Carmone Owens said he considers the idea that someone could be barred from voting simply because they cannot afford to pay off their fees, fines and restitution to be the epitome of disenfranchisement.

Convicted of first-degree armed robbery in 2007, he was released on parole in 2015 after serving eight years of a 35-year prison sentence. The black Birmingham resident, who now advocates for felons rights, is not eligible to vote until 2042 unless he receives a full pardon and pays off his legal financial obligations.

The right to vote should never be tied to the level of ones debt, he said. Its a moral issue and if you want people to come back and transition back into society, one of the fundamental tenets of society is the right to be able to vote.

This story is published with Reckon by AL.com, an in-depth, socially focused initiative of Alabama Media Group, the states largest media company