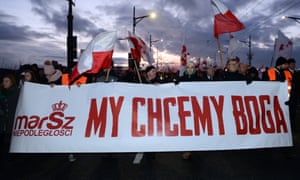 Polish nationalists carry a banner translating to We want God! during a march in Warsaw. Photograph: Jacek Turczyk/EPA

A smaller counter-protest by an anti-fascist movement took place on Saturday where, although organisers tried to keep the two groups apart, nationalists pushed and kicked several women who had a banner saying Stop fascism and chanted anti-fascist slogans.

Im shocked that theyre allowed to demonstrate on this day. Its 50 to 100,000 mostly football hooligans hijacking patriotism, said a 50-year-old Briton, Andy Eddles, a language teacher who has been living in Poland for 27 years. For me its important to support the anti-fascist coalition and to support fellow democrats, who are under pressure in Poland today.

Tusks appearance comes at a time when Warsaw has been increasingly at odds with Brussels because of the PiS governments controversial interference in the courts, large-scale logging in a primeval forest and a refusal to accept migrants. Relations between PiS and Tusk have been so tense that Poland was the only country to vote against his re-election as council president in March.