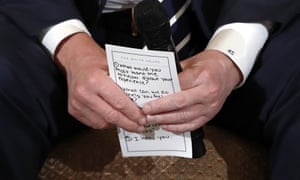 Donald Trump with notes during a listening session with high school students and teachers at the White House on Wednesday. Photograph: Carolyn Kaster/AP

Nicole Hockley, whose six-year-old son Dylan died at Sandy Hook elementary school in Newtown, Connecticut, spoke out against the idea of arming teachers. Its not personally something that I support. Rather than arming them with a firearm, I would rather arm them with the knowledge of how to prevent these acts from happening in the first place, she told Trump.

Safety assessments programmes and interventions for troubled children are vital, she added. Lets talk about prevention. There is so much that we can do to help people before it reaches that point, and I urge you please stay focused on that as well. It is the gun, its the person behind the gun and its about helping people before they ever reach that point.

Earlier during the session in the state dining room, where some speakers were tearful but composed as they recalled their experiences, Hockley also issued a challenge to the president. This is not difficult, she told him. These deaths are preventable. And I implore you: consider your own children. You dont want to be me. No parent does.

During the meeting Trump also asserted that he would be very strong on background checks for gun buyers as well as mental health issues. He sat in the middle of a semi-circle listening intently as six survivors of last weeks shooting and bereaved parents from Parkland, Columbine, and Sandy Hook took turns to address him.

Sam Zeif, 18, a Parkland student whose text messages with his brother during last weeks shooting went viral, fought back tears as he told Trump: I turned 18 the day after. Woke up to the news that my best friend was gone. I dont understand why I can still go in a store and buy a weapon of war, an AR. I was reading today that a person 20 years old walked into a store and bought an AR-15 in five minutes with an expired ID. How is it that easy to buy this type of weapon? How are we not stopping this after Columbine, after Sandy Hook, sitting with a mother that lost her son? Its still happening.

Andrew Pollack, whose 18-year-old daughter Meadow was killed at Stoneman Douglas, reflected the candid anger of many when he took the microphone. Were here because my daughter has no voice she was murdered last week, shot nine times, he said. How many schools, how many children have to get shot? It stops here, with this administration and me.

Pollack, his voice rising with raw emotion, added: It should have been one school shooting, and we should have fixed it, and Im pissed because my daughter, Im not going to see again.