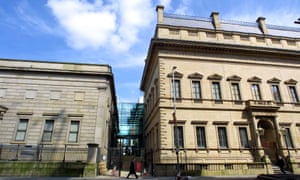 Manchester Art Gallery: the removed painting usually hangs in a room titled In Pursuit of Beauty. Photograph: Don McPhee for the Guardian

The artist Michael Browne who attended the event where the painting was taken down said he was worried the past was being erased.

I dont like the replacement and removal of art and being told thats wrong and this is right. They are using their power to veto art in a public collection. We dont know how long the painting will be off the wall it could be days, weeks, months. Unless there are protests it might never come back.

Browne said he feared historical paintings were being jettisoned in favour of contemporary ones.

I know there are other works in the basement that are probably going to be deemed offensive for the same reasons and they are not going to see the light of day.

Gannaway said the removal was not about censorship.

We think it probably will return, yes, but hopefully contextualised quite differently. It is not just about that one painting, it is the whole context of the gallery.

Waterhouse is one of the best-known pre-Raphaelites, whose Lady of Shalott is one of Tate Britains bestselling postcards, but some of his paintings leave people uncomfortable and he has been accused of being one step away from a pornographer.

Reviewing the 2009 Royal Academy of Arts show devoted to Waterhouse, the critic Waldemar Januszczak wrote of a painting showing the death of St Eulalia, a 12-year-old girl: I did not know whether to laugh, cry or call the police.