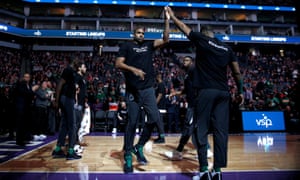 At a game between the Boston Celtics and the Sacramento Kings, both teams wore T-shirts to honor Stephon Clark. Photograph: Cary Edmondson/USA Today Sports

Looking at a photo of the stadium that remained largely empty due to protests, Stevantes eyes welled with tears: Stephon would be so proud. Stephon shut the whole place down.

He said he appreciated the support for his brother in Sacramento, but was skeptical the story would get the attention it deserves at a national level.

Locally, Stevante said he wanted the tragedy to spark change and hoped to build a library in his brothers honor while supporting other gun violence prevention efforts, such as breakfast programs and community centers.

Still, he said he did not think of himself as an activist or leader and struggled with the constant reminders of his brothers death people stopping him on the street, calls from reporters, social media postings. Hes avoided watching the police videos and many of the news reports.

Its hard to find relief, he said, noting that he was still unable to feel comfortable in his familys home where his brother died. Where can you fucking go if youre not safe at grandmas house?