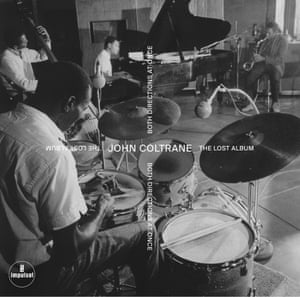 Cover artwork for John Coltranes Both Directions at Once: the Lost Album. Photograph: Impulse!

Both Directions at Once was recorded at an intensely fertile time for Coltrane and his quartet as well as Ballads and Impressions, he also released a collaboration with Duke Ellington in 1963. The lost session was recorded during a two-week run of shows at Birdland Coltrane played the club straight after the session and the following day, 7 March, he recorded the album John Coltrane and Johnny Hartman with the jazz singer (its tracklisting changed on the way to the studio, after the pair heard Nat King Cole singing Lush Life on the radio and decided to include their own version).

Saxophonist Wayne Shorter, interviewed for the albums liner notes, says the title Both Directions at Once came from a compositional tip Coltrane gave to him: about starting a sentence in the middle, and then going to the beginning and the end of it at the same time. The Guardians jazz critic John Fordham finds another meaning: Coltrane was looking back at bebop the virtuosity and melodic resources of which he had stretched to breaking point and the song-based lyricism of jazz he had recently explored with Duke Ellington, and was about to with Johnny Hartman. But he was also looking forward to imagining the more intense, mantra-like, spiritually-driven music that produced A Love Supreme in 1964.

British jazz and improv saxophonist Evan Parker meanwhile told the Guardian: This release is most welcome the classic quartet was where Coltrane did his best work. He picked out Coltranes interplay with drummer Elvin Jones as being the core of the music … which reached astonishing levels of intuitive understanding.

Ratliff adds that most of all, Both Directions at Once is a study in how seriously strong the band was, and how powerful his intent, or his concentration, had become.