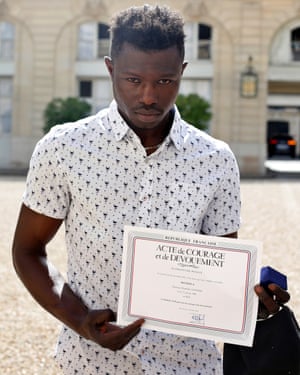 Mamoudou Gassama with a certificate of courage and dedication at the lyse Palace. Photograph: Thibault Camus/Pool/EPA

Gassama, who has nine brothers and sisters, told BFM TV that when he had the child in his arms he asked why did you do that?. But the child did not say anything. Gassama said he only fully realised what he had done when he was in the apartment, looking down.

Gassama was accompanied to the palace by his brother Diaby. Asked if he had anything to say to the president, Gassama seemed overwhelmed, so Diaby replied: We want to be officialised. We have no papers but we want them so we can work in good conditions and we need homes.

Diaby said his brother was living in temporary housing. Its a bad situation but we live with it. We will take the opportunity to ask [the president] for this.

Afterwards, faced with a barrage of television cameras and journalists, Gassama seemed lost for words.

He gave me a present, he said of Macron. Its the first time Ive had anything like this. Im very happy.

Macron tweeted that in recognition of Gassamas heroic act, his status in France would be made official with a carte de sjour (residency card) as quickly as possible. The president also invited Gassama who has been living without official papers in Paris since he arrived from Mali in September to put in a request for naturalisation.

The interior minister, Grard Collomb, confirmed that he would personally ensure Gassamas request would be accepted.

The government spokesman Benjamin Griveaux tweeted: This act of immense bravery, faithful to the values of solidarity of our republic, should open the door to him to our national community.

The citys mayor, Anne Hidalgo, and her deputies vowed to help the young man in his attempts to remain in France.

In the footage recorded from the street, a man and woman in the neighbouring flat can be seen spotting the boy from their balcony. The man grabs the childs right arm but appears unable to pull him to safety because of a dividing wall between the balconies.

Gassama said he asked the child how he came to be hanging from the balcony in the 18th arrondissement in the north of Paris.

He didnt answer. I asked where his mother was and he said she had gone to a party, he told journalists.

The father of the child was detained overnight for alleged parental neglect, and is to appear in court in September. Police said the childs mother was not in Paris at the time of the incident and the boy was now in the care of social services.

On Monday, the deputy president of the far-right Front National, Nicolas Bay, sounded a more cynical note about Gassamas residency status. If you tell me, well make that one official because of his act of bravery and well expel all the others, Ill sign up to that, Bay told France 2 television.

Only a handful of undocumented migrants have their status regularised in France for acts of public service or exceptional talent. In 2015, Lassana Bathily, also from Mali, was given asylum after helping hostages taken by the terrorist Amedy Coulibaly at the Hyper-Cacher supermarket, and assisting police and special forces to end the siege.

The French documentary maker and commentator Raphal Glucksmann wrote on his Facebook page: Like everyone else, I admire the bravery of Mamoudou Gassama. But I dream of a country where it wont be necessary to put ones own life at risk scaling a building to save the life of a child in order to be treated like a human being when one is a migrant.