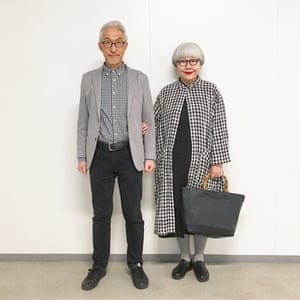 Bon and Pon in gingham. Photograph: ‘May’ Seki

They have always had similar tastes in clothes, but it was Instagram fame that prompted them to coordinate more closely, even during lazy days at home and trips to the supermarket.

But its not just about coordinating our clothes, said Tsuyoshi. We try to choose outfits that complement our surroundings.

Much of their wardrobe comes from Uniqlo and other high street chains a no-frills approach they believe has contributed to their popularity. Of course were happy to be described as style icons in the media, but thats not really how we see ourselves. We wear simple, inexpensive clothes that anyone can buy, said Tomi.

Outfits aside, they hope to convince other older couples that retirement should mark the start of a second life the title of one of their books.

Now were on our own and finally have the time to do all the things we didnt have the time to do when we were raising a family and working, Tomi said. We want to show that retirement can be a lot of fun, especially if you find something you enjoy doing together.

The couple met at a festival when they were both students at an art school in Tokyo. Tsuyoshi went on to work in design and marketing, while Tomi chose to stay home with their daughter.

Each of their photos attracts tens of thousands of likes and universally upbeat comments in Japanese, English and other languages.

Were overwhelmed by the number of comments, although were unable to understand all of them, said Tsuyoshi But were extremely grateful to everyone who takes the time to post.