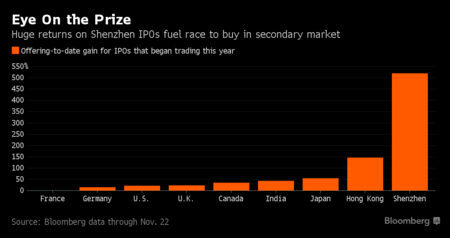 To have a shot at the global stock markets closest thing to a guaranteed windfall, youre going to need a really accurate clock.

Because with this trade, success has nothing to do with corporate fundamentals or technical patterns. Its all about timing, and fractions of a second can mean the difference between a 360 percent return or nothing at all.

They call the strategy hit stock in China. And its there, on the countrys most-active exchange in Shenzhen, that a unique mix of market rules and government intervention has turned newly-listed shares into huge winners for investors who place their bids at just the right moment.

In an otherwise lackluster year for Chinas equity market, the gains have helped fuel a technological arms race among local brokers eager to give their clients an advantage. Even after Shenzhens bourse tweaked its order system to level the playing field in June, enthusiasm for the hit stock trade shows little sign of letting up.

Its one of the few strategies thats consistently profitable, said Hao Hong, a strategist at Bocom International Holdings Co. in Hong Kong. Traders will try to find a way around the Shenzhen exchanges new settings.

To understand the strategy, it helps to start with how Chinese IPOs are priced before they begin trading. Unlike in the U.S. and Europe, where market forces play the deciding role, new offerings in China are subject to a regulatory ceiling on valuations. The cap was designed to protect individual investors, but has resulted in dramatically under-priced IPOs that surge once they hit the secondary market.

All of this years initial share sales in China have been valued at 23 times earnings or less, versus the median ratio of 68 for stocks in the Shenzhen Composite Index, according to data compiled by Bloomberg and China Finance Information Network. And every one of the 99 new listings in Shenzhen has climbed by the daily maximum on its trading debut.

The biggest returns go to those who invest at the initial offering stage. But in Chinas IPO lottery system, intense competition means the odds of actually winning an allocation are minuscule. Just 0.05 percent of orders were filled for the average Chinese IPO in 2016, according to CFIN.

For traders who come away empty-handed, the hit stock strategy offers a second chance.

The challenge is to buy before the mispricing disappears. In markets like the U.S. and Hong Kong, IPO discounts vanish quickly because theres no limit to how much shares can climb on the first trading day. Shake Shack Inc., for example, opened with a 124 percent gain in its New York debut last year, leaving little short-term upside for investors who bought in the secondary market.

In China, a 44 percent limit on first-day gains and a 10 percent cap thereafter ensures IPO discounts narrow over several sessions. That increases the chance of a seller unloading their position too soon, either because theyre uninformed or have urgent liquidity needs, according to Ken Chen, a Shanghai-based analyst at KGI Securities.

The key to buying those shares is getting your order to the bourse before anyone else.

Each morning during its opening auction, Shenzhen accepts bids that arrive at 9:15 a.m. or later. Under the old system, traders with computer systems located closest to the exchange had the advantage because it took less time for their orders to travel through fiber-optic cables to the bourses servers, according to a person familiar with the matter.

Under the system started in June, the Shenzhen exchange allows brokers to gauge their transmission time (or latency in the industry jargon) and place orders slightly before the opening auction begins, accepting those that arrive at 9:15 a.m. or later. That means a buyer from Beijing, 1,200 miles from Shenzhen, could theoretically beat a rival located right next to the exchange, the person said.

While its unclear whether the new system has substantially affected the chances of success on hit stock trades, exchange figures compiled by Bloomberg News show a changing mix of winners.

Before the system upgrade took effect, this years most active first-day buyer was a branch of Chinalin Securities in Shenzhen. Of the 29 IPOs that had begun trading through June 6, the broker was a top-five purchaser of six during their debut trading sessions.

Calls to the Chinalin and Donghai branches went unanswered. An employee at the Zheshang Shanghai branch, who declined to identify himself, said the office didnt notice a difference between the earlier and current systems, based on feedback from clients.

Some broker branches with technological edges used to appear quite frequently on the top buyer lists of new shares, but we are seeing more diversified lists now, said Paul Yang, a 33-year-old private investor in Shanghai who traded shares at an investment firm for eight years before quitting to manage his own money.

This suggests less distinct advantages for some after the adoption of the new trading system, as well as a more fair and random ordering process, he said. But its unlikely to make the game entirely fair.

Representatives from the Shenzhen exchange and its counterpart in Shanghai declined to comment. Odds of success for hit stock trades in Shanghai have always been lower than those in Shenzhen, according to senior managers at Chinese brokerages who asked not to be named because the information isnt public.

The trades biggest drawback is that its difficult to execute in bulk. A dearth of sellers keeps volumes low, with the average first-day turnover for new offerings in Shenzhen this year totaling just 280,000 yuan ($40,500). Daily turnover averaged 37 million yuan over the first 10 days, versus 176 million yuan for the Shenzhen Composites median stock by market value.

But even small holdings are better than nothing in a year when the citys benchmark index is down 7.9 percent. For Shenzhen IPOs with at least a month of trading history, the average return to investors who purchased at the first limit-up price was 366 percent through Friday, according to data compiled by Bloomberg.

Of course, getting in that early is easier said than done.

I tried to buy new shares after the system upgrade but failed, Yang said. One day, I might be able to succeed.

With assistance by Amanda Wang, and Gary Gao