Comedy duo produce spoof in which a female interviewee feeds her child, cleans a toilet, cooks dinner and defuses a bomb 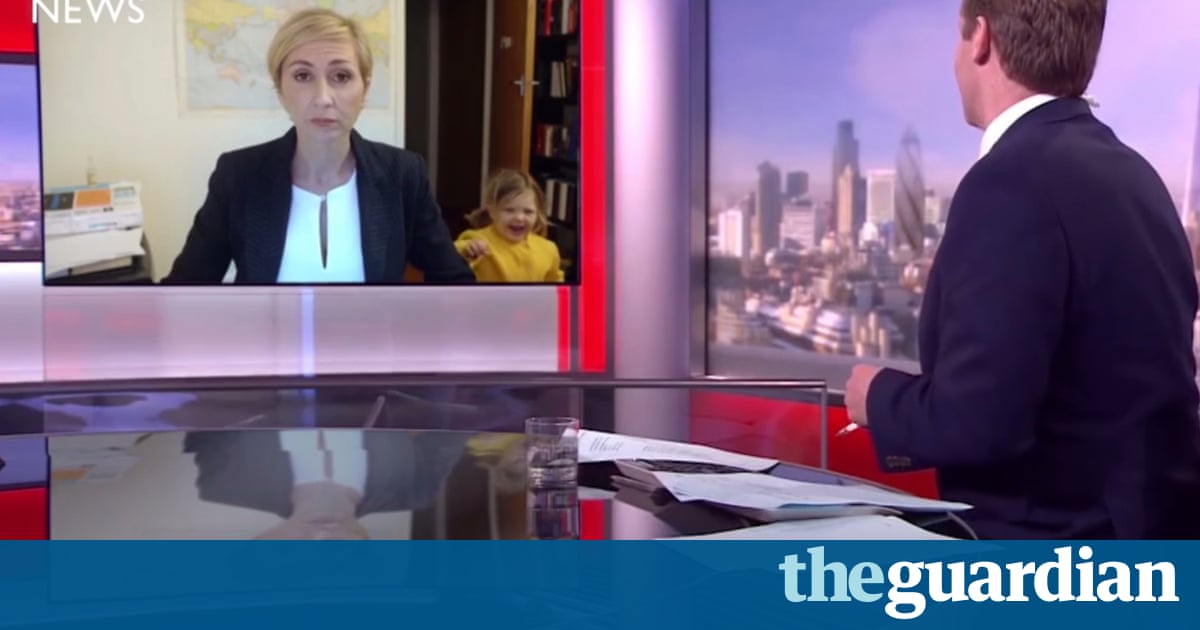 A video has emerged parodying the BBCs viral hit which featured a professor interrupted by his children during a live interview, re-imagining how the scene would have unfolded if a woman had been in the hot-seat.

Last week the video of university professor Robert Kellybecame world-famous after his four-year-old daughter Marion barged into the room mid-interview, followed by his eight-month-old son James and finally his panicked wife Jung-a Kim.

The New Zealand comedy show Jono and Ben released their spoof on Thursday night, with a woman as the interviewee. The Facebook video has been watched 32m times.

During the one-minute clip the woman is first interrupted by a young child in a yellow jumper. She seamlessly continues answering complex political questions about South Korea while pulling the child onto her lap and feeding her a bottle.

Next, a baby totters into the room with a walker, and the woman continues answering questions, her eyes never leaving the camera, whilst holding the child in her lap, and entertaining the baby with a rattling ball.

As the child wanders out of the room the mother reaches off-camera and pulls out a roast chicken dinner, sniffing it to check if it is ready.

The BBC interviewer observes You do look rather busy there, we can reschedule … but the woman ignores him, reaching for a shirt to de-lint while she speaks, and, a moment later, scrubbing a toilet bowl that appears on her left.

The interview continues as a bomb squad in flak-jackets burst into the room, and the woman defuses a bomb; Oh my god, is that a bomb? asks the interviewer.

As the interview draws to a close a man in bare feet speaking in a broad New Zealand accent rushes into the study, flapping a sock at the womans back.

The BBC presenter thanks the woman for her time, calling the interview interesting. The woman smiles warmly, her eyes finally leaving the camera. OK, lets find this sock then! she says cheerfully.

The Jono and Ben version of the video was greeted with a decidedly mixed response. Some female commentators called the video hilarious and said it was an accurate and amusing reflection of a working mothers life. However many others, both male and female, labelled the parody sexist and said it was a classic example of man-bashing.

While the candid video was mostly embraced as a charming and spontaneous moment of family life interrupting a professional interview, some viewers were critical of the professors reaction, saying he should have responded to his children instead of ignoring them.