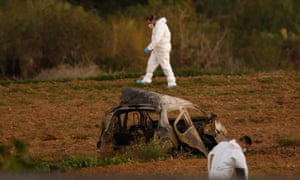 According to local media reports, Caruana Galizia filed a police report 15 days ago to say that she had been receiving death threats.

The journalist posted her final blog on her Running Commentary website at 2.35pm on Monday, and the explosion, which occurred near her home, was reported to police just after 3pm. Officers said her body had not yet been identified. According to sources, one of her sons heard the blast from their home and rushed out to the scene.

Caruana Galizia, who claimed to have no political affiliations, set her sights on a wide range of targets, from banks facilitating money laundering to links between Malta’s online gaming industry and the Mafia.

Over the last two years, her reporting had largely focused on revelations from the Panama Papers, a cache of 11.5m documents leaked from the internal database of the world’s fourth largest offshore law firm, Mossack Fonseca.

The data was obtained by the German newspaper Sddeutsche Zeitung and shared with media partners around the world, including the Guardian, by the International Consortium of Investigative Journalists (ICIJ) in Washington.

Her family have filed a court application demanding a change of inquiring magistrate. Investigations into the case are being led by Consuelo Scerri Herrera, the magistrate who was on duty at the time. But Herrera had come under criticism by Galizia in her blog. The family’s petition states that they “have zero trust” in Scerri Herrera and “don’t believe that she can run a magisterial inquiry throughout the seriousness and impartiality that is necessary in the search for truth”.

Earlier this year, during Malta’s presidency of the European Union, her revelations caused major concern in Brussels.

MEPs openly called for Muscat’s departure amid a growing scandal involving his wife, a Panamanian shell company and alleged payments from the president of Azerbaijan’s daughter.

Muscat, who has been premier since 2013, went to the polls a year early after his wife was implicated in the scandal. He has always denied any wrongdoing and promised to quit if any evidence emerges of his family having secret offshore bank accounts used to stash kickbacks — as Caruana Galizia had alleged.

Responding to news of the attack, the German MEP Sven Giegold, a leading figure in the parliament’s Panama Papers inquiry, said he was “shocked and saddened”.

“It is too early to know the cause of the explosion but we expect to see a thorough investigation,” said Giegold. “Such events bring to mind Putin’s Russia, not the European Union. There may be zero tolerance for violence against the press and violations of their freedom of expression in the European Union.”

Opposition politicians claim rule of law has been under threat since Muscat returned Malta’s Labour party in 2013 following a long period in opposition. Four police commissioners have resigned under his direction. The fifth, Lawrence Cutajar, took up his post in August 2016.

There have been many car bomb killings in Malta during the past couple of years. While the perpetrators have never been identified, the violence is thought to have been associated with disputes between criminal gangs. None are considered to have been politically motivated.

Caruana Galizia was 53 and leaves three sons and a husband.