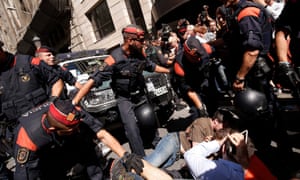 Rajoy’s government argues that any referendum on Catalan independence would be illegal because the country’s 1978 constitution makes no provision for a vote on self-determination.

The Spanish constitutional court, which has suspended the referendum law pushed through the Catalan parliament earlier this month, is looking into whether the law breaches the constitution.

Speaking on Wednesday morning, the prime minister defended the government’s actions, saying Puigdemont and his supporters were trying to “eliminate the constitution” and were ignoring the law.

“Logically, the state has to respond,” he said. “There is not any democratic state in the world that would accept what these people are trying to do. They have been warned and they understand the referendum can’t take place.”

The raids signal a significant escalation of Madrid’s efforts to stop the vote from proceeding — as do remarks from the Spanish foreign minister, who has accused some separatists of using a “Nazi” approach to intimidate Catalan mayors opposed to secession.

“Referendums are a weapon of choice of dictators,” said Alfonso Dastis in an interview with Bloomberg in New York on Tuesday. “These people actually are taking some Nazi attitudes since they’re putting up posters with the faces of mayors who are resisting their telephone to take part in this charade.

“A referendum isn’t the same as a democracy. Gen Franco organised two referendums.”

Spain’s finance ministry has launched a crackdown on the government’s finances, requiring oversight that was central for payment of non-essential services and restricting new credit.

Although more than 70 percent of Catalonia’s 7.5 million people are in favour of a referendum, surveys suggest they are almost evenly split on the problem of independence.

A poll two months ago revealed 49.4% of Catalans were against independence while 41.1% were in favour.

More than 80% of participants opted for independence at a symbolic survey three years ago — although only 2.3 million of Catalonia’s 5.4 million eligible voters took part.