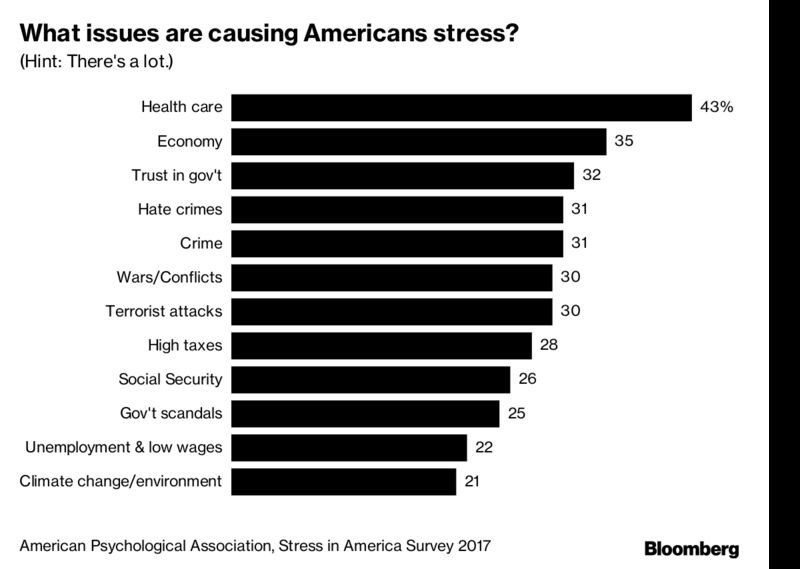 For those lying awake at night worried about health care, the economy, and an overall feeling of divide between you and your neighbors, there’s at least one source of comfort: Your neighbors might very well be lying awake, too.

Almost two-thirds of Americans, or 63 percent, report being stressed about the future of the nation, according to the American Psychological Association’s Eleventh Stress in America survey, conducted in August and released on Wednesday. This worry about the fate of the union tops longstanding stressors such as money (62 percent) and work (61 percent) and also cuts across political proclivities. However, a significantly larger proportion of Democrats (73 percent) reported feeling stress than independents (59 percent) and Republicans (56 percent).

The “current social divisiveness” in America was reported by 59 percent of those surveyed as a cause of their own malaise. When the APA surveyed Americans a year ago, 52 percent said they were stressed by the presidential campaign. Since then, anxieties have only grown.

A majority of the more than 3,400 Americans polled, 59 percent, said “they consider this to to be the lowest point in our nation’s history that they can remember.” That sentiment spanned generations, including those that lived through World War II, the Vietnam War, and the terrorist attacks of Sept. 11. (Some 30 percent of people polled cited terrorism as a source of concern, a number that’s likely to rise given the alleged terrorist attack in New York City on Tuesday.)

“We have a picture that says people are concerned,” said Arthur Evans, APA’s chief executive officer. “Any one data point may not not be so important, but taken together, it starts to paint a picture.”

The survey didn’t ask respondents specifically about the administration of President Donald Trump, Evans said. He points to the “acrimony in the public discourse” and “the general feeling that we are divided as a country” as being more important than any particular person or political party.

Yet he and the study note that particular policy issues are a major source of anxiety. Some 43 percent of respondents said health care was a cause. The economy (35 percent) and trust in government (32 percent) also ranked highly, as did hate crimes (31 percent) and crime in general (31 percent).

“Policymakers need to understand that this is an issue that is important to people, that the uncertainty is having an impact on stress levels, and that stress has an impact on health status,” Evans said, pointing out that the relationship between stress and health is well-established.

The APA survey did find, however, that not everyone is feeling the same degree of anxiety. Women normally report higher levels of stress than men, though worries among both genders tend to rise or fall in tandem. This year, however, they diverged: On a 10-point scale, women reported a slight increase in stress, rising from an average 5.0 in 2016 to 5.1 in 2017, while the level for men dropped, from an average 4.6 to 4.4.

Racial divides also exist in reported stress. While the levels among blacks and Hispanics were lower in 2016 than the year before, they rose for both groups in 2017, to 5.2 for Hispanic adults and 5.0 for black adults. Among whites, meanwhile, the average remained the same, at 4.7.

The report also notes that many Americans are finding at least one healthy way to feel better: 53 percent reported exercising or doing other physical activity to cope. Social support is also important,  Evans said. “Third,” he says, “I think it’s really important for people to disconnect from the constant barrage of information.”