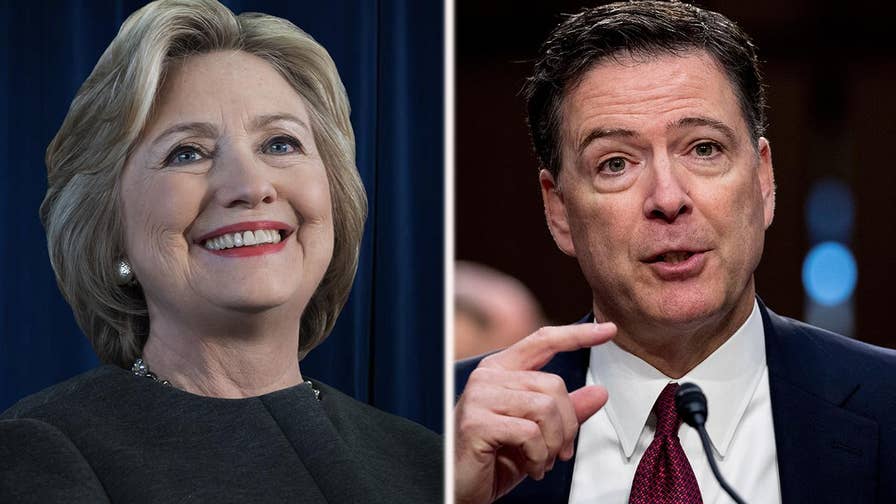 The contents of the email were largely unclear as nearly all of it was redacted. The now-public records show the email titled “Midyear Exam — UNCLASSIFIED” was sent by Comey on May 2, 2016, to Deputy Director Andrew McCabe, general counsel James Baker and chief of staff and senior counselor James Rybicki.

On May 16, the documents showed a response email from Rybicki, saying “Please send me any comments on this statement so we may roll into a master doc for discussion with the Director at a future date. Thanks, Jim.”

TRUMP SLAMS CLINTON FOR DEFENDING NFL ANTHEM KNEELERS, SAYS THAT ‘THINKING’ IS WHY SHE LOST

The existence of the documents, reported by Newsweek, were first brought to light by Sen. Chuck Grassley, R-Iowa, chairman of the Senate Judiciary Committee, and Sen. Lindsey Graham, R-S.C., also a member of the committee, after they reviewed transcripts of interviews with top Comey aides who alluded to the email’s existence. The Senate Judiciary Committee is investigating Comey in his role as FBI director and President Trump’s decision to fire him in May.

The senators penned a letter on Aug. 30 to newly-appointed FBI Director Christopher Wray noting their findings, saying that “it appears that in April or early May of 2016, Mr. Comey had already decided he would issue a statement exonerating Secretary Clinton. That was long before FBI agents finished their work,” the letter said. “The outcome of an investigation should not be prejudged while FBI agents are still hard at work trying to gather the facts.”

Former FBI Director James Comey is sworn in prior to testifying before a Senate Intelligence Committee hearing on Russia’s alleged interference in the 2016 U.S. presidential election on Capitol Hill in Washington, U.S., June 8, 2017.  (REUTERS/Jonathan Ernst)

Clinton, the Democratic presidential candidate in 2016, was investigated by the FBI for using a private email address and server to handle classified information while serving as secretary of state.

The existence of such an email draft raised questions about Comey’s Senate testimony in June 2017 regarding his decision to go public with findings in the Clinton email investigation.

At the time, Comey testified that he was inclined to publicly announce the results of the probe to “protect the credibility of the investigation,” after then-Attorney General Loretta Lynch and former President Bill Clinton had an unscheduled meeting on a tarmac in Arizona.

CONGRESSIONAL INVESTIGATORS MEET ‘A LOT OF RESISTANCE’ FROM FBI, DOJ ON ANTI-TRUMP DOSSIER

He also said “other things” encouraged him to make the announcement, including Lynch allegedly urging him to refer to the email scandal as a “matter” and not an “investigation.”

“That was one of the bricks in the load that led me to conclude I have to step away from the department” in order to close the case “credibly,” he said.

Calls for Comey to return to Capitol Hill for questioning have mounted, including from Graham who said he would subpoena Comey if he had to.

“He’s coming one way or the other,” Graham told Fox News’ “America’s Newsroom” on Sept. 14.

PrevPreviousWhite House ‘is full of white supremacists’ – Trending Stuff
NextI called Hugh Hefner a pimp, he threatened to sue. But thats what he wasNext