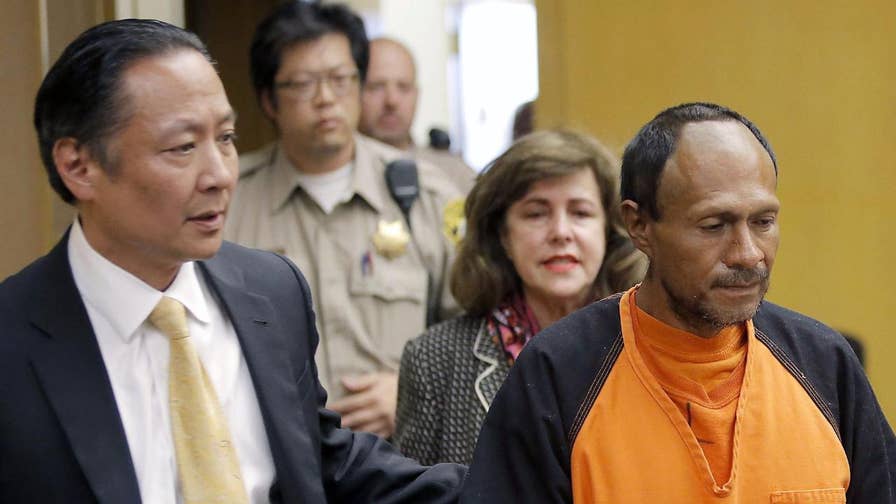 A California jury acquitted Zarate of the more serious charges in the case, including murder, involuntary manslaughter and assault with a deadly weapon — only convicting him of being a felon in possession of a firearm.

U.S. immigration officials had said they would deport Garcia Zarate – also known as Juan Francisco Lopez Sanchez — who already had been deported five times and was wanted for a sixth deportation when Steinle was fatally shot in the back while walking with her father.

The undocumented felon could spend three years in prison for the firearm charge but has already been behind bars for over two years as the case has made its way through court.

The consideration of federal charges comes as President Trump calls the verdict “disgraceful” and uses the case to rally support for a border wall.

“The Kate Steinle killer came back and back over the weakly protected Obama border, always committing crimes and being violent, and yet this info was not used in court. His exoneration is a complete travesty of justice. BUILD THE WALL!” he tweeted Friday.

“When jurisdictions choose to return criminal aliens to the streets rather than turning them over to federal immigration authorities, they put the public’s safety at risk. San Francisco’s decision to protect criminal aliens led to the preventable and heartbreaking death of Kate Steinle,” he said. “While the State of California sought a murder charge for the man who caused Ms. Steinle’s death—a man who would not have been on the streets of San Francisco if the city simply honored an ICE detainer—the people ultimately convicted him of felon in possession of a firearm.”

Without making mention of any additional charges, he said the DOJ “will continue to ensure that all jurisdictions place the safety and security of their communities above the convenience of criminal aliens.”

The fatal shooting of 32-year-old Steinle – on a San Francisco pier in 2015 — touched off a fierce national immigration debate, and was used by then-candidate Trump to push for a wall on the Mexican border.

Defense attorneys, though, argued that Garcia Zarate was a hapless homeless man who killed Steinle in a freak accident. Prosecutors said he meant to shoot and kill her.

Garcia Zarate did not deny shooting Steinle and said it was an accident.

Jake Gibson is a producer working at the Fox News Washington bureau who covers politics, law enforcement and intelligence issues.