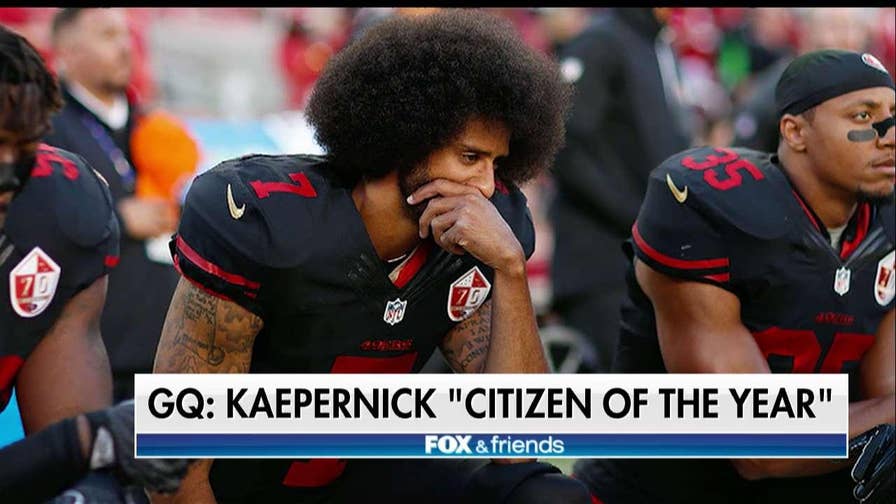 GQ magazine has named Colin Kaepernick, the unemployed NFL quarterback, as its 2017 Citizen of the Year.

Mr. Kaepernick, the former San Francisco 49ers quarterback, was responsible for starting a national movement to protest the Star Spangled Banner by taking a knee along the sideline.

Click here for a free subscription to Todd’s newsletter: a must-read for Conservatives!

It wasn’t long before football players across the fruited plain, from pee-wee to professional, emulated Mr. Kaepernick’s unpatriotic protest. Even a few cheerleaders dropped their pom-poms in a show of solidarity.

They said they were protesting alleged racial inequality and police brutality, but it’s pretty clear to most of the country that Mr. Kaepernick and his minions were dishonoring the flag, the anthem and the military.

GQ, the magazine for emasculated men, hailed Mr. Kaepernick as a “powerful symbol of activism and resistance.”

Apparently, GQ seems to think that disrespecting our military and spitting on our flag is a symbol of heroism and manliness. That’s not citizenship – that’s cowardice.

The designation came in the magazine’s annual “Men of the Year” edition – subtitled, “The New American Heroes.”

Apparently, GQ seems to think that disrespecting our military and spitting on our flag is a symbol of heroism and manliness.

“In my view, the most pernicious element of white backlash against Colin’s protest has been the way in which the narrative has been co-opted and re-framed so that taking a knee is now somehow synonymous with disrespecting the flag, with a lack of patriotism,” scholar Christopher Petrella wrote in a GQ essay.

“There might even be a day when we’ll be walking down Colin Kaepernick Boulevard and people will remember what Colin Kaepernick did, just like we remember Muhammad Ali,” she wrote in a GQ essay. “And I truly believe that in my heart.”

It’s quite telling when you consider who did not make the GQ “Citizen of the Year” list.

Marine veteran Taylor Weston commandeered a pickup truck and rushed victims of the Las Vegas massacre to the hospital. He did not make the list.

Nor did Stephen Willeford, the Texas plumber who grabbed a gun and ran barefoot towards the First Baptist Church in Sutherland Springs. His actions stopped a mad man from killing even more innocent people.

The all-volunteer Cajun Navy did not make the list either. They pulled hundreds of citizens from the floodwaters in the aftermath of Hurricane Harvey.

And the hundreds of teenage football players who honored our flag and our troops by staging patriotic, pre-game celebrations did not make the list either.

GQ’s definition of what it means to be a good citizen and a good man and a hero is a bit puzzling.

They seem to believe the epitome of manhood is taking a knee. But I say the true measure of a man is taking a stand.