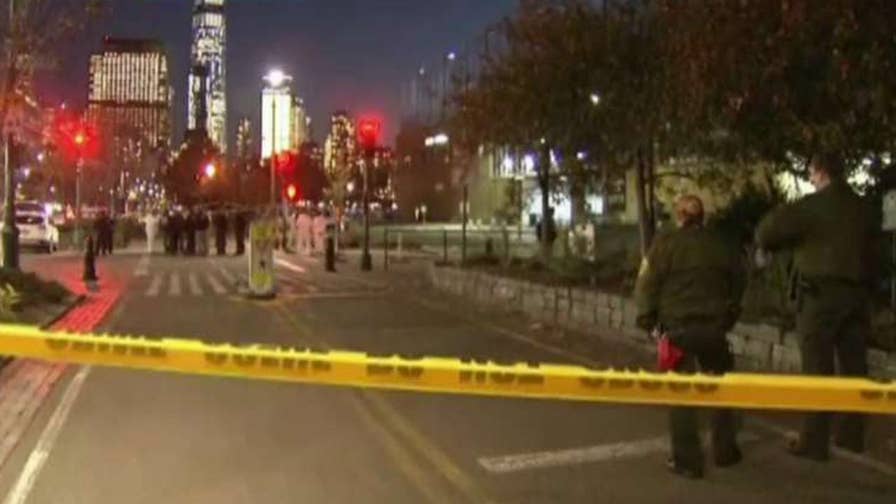 A suspect accused of plowing a pickup truck onto a bike path and into a crowd in New York City Tuesday, killing at least eight people and injuring 11 more, is not a U.S. citizen and is originally from Uzbekistan, federal law enforcement sources have confirmed to Fox News.

The suspected driver, 29-year-old Sayfullo Saipov, had handwritten notes pledging his loyalty to the Islamic State terror network and shouted “Allahu Akbar” after the crash, law enforcement officials told Fox News. Saipov, who was shot by police, was taken into custody and remains hospitalized.

Suspect Sayfullo Saipov, who was originally from Ukbekistan, was in the U.S. on a green card, sources confirmed to Fox News.  (St. Charles County Department of Corrections)

The suspect, from Ukbekistan, had a green card, a source told Fox News. Saipov came to the U.S. in 2010, and, according to The Associated Press, has a Florida license but may have been living in New Jersey.

Saipov was an Uber driver who had passed a background check, the company told Fox News. It added that Saipov has now been banned from the app, and Uber has offered assistance to the FBI.

His notes, written in Arabic and pledging loyalty to ISIS, turned up in and near the vehicle, Fox News is told. In addition, The New York Post reported that investigators found “an image of the ISIS flag inside his vehicle.”

Four of the injured were teachers and students who were riding on a short yellow school bus near Stuyvesant High School when they were hit by the suspect’s Home Depot rental truck. One student remains in critical condition.

A victim killed in the attack was a Belgian citizen, Belgian Deputy Prime Minister and Foreign Affairs Minister of Belgium Didier Reyners tweeted on Tuesday. Three Belgians were also injured.

The suspect in Tuesday’s terror attack in New York City was driving a Home Depot rental truck when he plowed down a group of pedestrians near the World Trade Center.  (AP Photo)

Others killed in the attack were Argentine citizens, according to Argentina’s Foreign Ministry. Argentine newspaper La Nacion reported five of the eight people killed were Argentines traveling in the U.S. on a celebratory vacation.

Those killed, according to the country’s Ministry of Foreign Affairs, are Hernán Mendoza, Diego Angelini, Alejandro Pagnucco, Ariel Erlij and Hernán Ferruchi.

The incident was being treated as a terrorist attack. At a news conference Tuesday evening, Mayor Bill de Blasio called the attack “an act of terror and a particularly cowardly act of terror aimed at innocent civilians.”

Gov. Andrew Cuomo referred to the incident as a “lone wolf” attack, and added that at this point in the investigation, there is no evidence to suggest that there was a wider plot.

Around the globe, cities have been on high alert regarding vehicle attacks. ISIS has been encouraging its followers to mow down people, and England, France and Germany have all seen deadly vehicle attacks in recent months and years.

FBI officials confirmed to Fox News that they have agents responding to the situation with the NYPD. A bomb squad examined the truck, but found no explosives.

Acting Secretary of Homeland Security Elaine Duke said in a statement that “DHS and its law enforcement partners remain vigilant and committed to safeguarding the American people.”

Following the incident, President Donald Trump tweeted, “looks like another attack by a very sick and deranged person. Law enforcement is following this closely. NOT IN THE U.S.A.!”

Trump later tweeted that his “thoughts, condolences and prayers to the victims and families of the New York City terrorist attack. God and your country are with you!”

Police said the truck entered the bike path on West Street a few blocks from the new World Trade Center — the site of the deadliest terror attack in U.S. history — and plowed into several people. The driver jumped out of his rental truck — which police say Saipov rented from Home Depot around 2 p.m. Tuesday — carrying what turned out to be a paintball gun and a pellet gun.

Video of the attack provided to Fox News by a witness shows the accused suspect running through traffic on the West Side Highway, surrounded by police in the nearby area.

Despite the attack, the city’s Halloween Parade went on as planned, with police “dramatically increasing presence,” including “personnel, blocker trucks, long guns etc.,” according to de Blasio’s press secretary. Cuomo and de Blasio both attended the annual event.