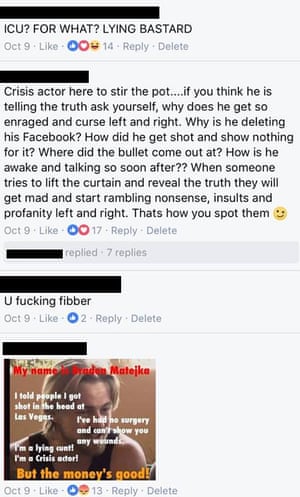 There are all these families dealing with likely the most horrific thing theyll ever experience, and they are also met with hate and anger and are being attacked online about being a part of some conspiracy, said Taylor Matejka, Bradens brother, who shared with the Guardian dozens of screenshots of the abuse. Its madness. I cant imagine the thought process of these people. Do they know that we are actual people?

Conspiracy theorists some of whom claim that the government staged the shooting on 1 October or that the tragedy was a hoax have targeted survivors and victims loved ones, spamming every social media platform with misinformation and abuse. On Facebook and YouTube in particular, users have published viral posts and videos calling people like Braden crisis actors, alleging they were hired to pose as victims.

While fringe conspiracies have often emerged after national tragedies and major historical events, social media has dramatically expanded the scope and scale of the problem, making it easy for false claims to reach massive audiences and giving trolls easy access to targets online.

It makes you angry, said Rob McIntosh, 52, who was shot in the chest and arm in Las Vegas and has since been accused of being an actor who faked his injuries. Youve already been through something thats traumatic and terrible, and you have someone who is attacking your honesty. You dont even have the opportunity to respond.

I hope someone comes after you

Braden Matejka, from British Columbia, Canada, traveled to Las Vegas with his girlfriend, Amanda Homulos, to celebrate his 30th birthday at a country music festival. Police say the gunman, Stephen Paddock, whose motives remain unknown, fired into the crowd of people at the outdoor concert from a 32nd-floor room of the Mandalay Bay hotel.

As the couple was fleeing, Braden was knocked down by a bullet in the back of his head, landing on his face. He was covered in blood, but remained responsive, and he and his girlfriend, who was not hit, quickly made it inside the car of another concertgoer, who drove them to a hospital.

The wound to his skull was not life-threatening, and days later, the couple gave an emotional interview on camera to the Associated Press about their escape.

Im just so grateful that were still here, and I cant even express how sorry I am for people that didnt make it out, Homulos said through sobs. In another video interview, published by the Guardian and other news organizations, Braden explained that the bullet was very close to killing him: If it was an inch over it wouldve been in my brain, and I wouldve been gone.

His brother Taylor and others began promoting on Facebook a GoFundMe campaign to help raise money for Braden, who was suffering from bleeding and swelling in his brain and blurred vision. The heavy-duty mechanic and welder also had to take time off work.

Friends and relatives posted messages of love and support in response. But soon, the nasty messages began to arrive, with strangers sending comments at such a rapid rate that it was hard for the family to keep up.

Obviously a TERRIBLE CRISIS ACTOR, wrote a Facebook user named Samantha. HES SCAMMING THE PUBLIC This was a government set up.

YOUR A LIAR AND THEFT PIECE OF CRAP [sic] , wrote Karen.

Youll pay on the other side, said a user named Mach. Others called Braden a LYING BASTARD, scumbag govt actor and fuckin FRAUD, while one user named Josh wrote: I hope someone comes after you and literally beats the living fuck outa you.

Taylor, 28, recalled: I was just blown away by what these people were saying.

One woman posted 26 consecutive messages under Taylors request for donations for his brother, saying she had been a nurse for more than two decades and that she was certain Braden was a liar and con artist.

Chased off the internet