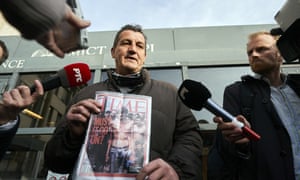 Fikret Ali holds a copy of Time magazine that featured his emaciated image on its cover in 1992. Photograph: Phil Nijhuis/AP

Mladi was one of the worlds most wanted fugitives before his arrest in 2011 in northern Serbia. He was transferred to the ICTY in the Netherlands, where he refused to enter a plea. A not guilty plea was eventually entered on his behalf. Through much of the trial in The Hague, he was a disruptive presence in court, heckling judges and on one occasion making a cut-throat gesture towards the mother of one of the 8,000 victims of the 1995 Srebrenica massacre.

Mladi was acquitted of only one charge, that of genocide in Bosnian municipalities outside Srebrenica. The chamber ruled that although he was part of a joint criminal enterprise to carry out mass killings there, which represented crimes against humanity, they did not rise to the level of genocide because the victims did not represent a substantial proportion of the Bosnian Muslim population of those municipalities.

The Bosnian Serb political leader, Radovan Karadi, was also found not guilty of genocide in the municipalities. That tribunal verdict in 2016 triggered protests from Bosniaks, who wanted the court to acknowledge that genocide was committed across Bosnia, not just in Srebrenica.

In evaluating Mladis culpability for genocide, the court pointed to his command and control of the Bosnian Serb army and interior ministry forces, which carried out almost all of the executions, his presence in the area, and his frequent remarks about how the countrys Muslims could disappear.

Orie said: The chamber found that the only reasonable inference was that the accused intended to destroy the Bosnian Muslim of Srebrenica as a substantial part of the protected group of Muslims in Bosnia Herzegovina.

Once Mladic has exhausted any appeals, he could, theoretically, be sent to the UK to serve out the rest of his life behind bars. Britain is one of the countries that has signed up to the tribunals agreement on the enforcement of sentences.
The UK has hosted other Serbian convicts sent on from the ICTY. In 2010, Radislav Krsti who was convicted at the Hague in 2001 for his part in the Srebrenica massacre, had his throat slashed in his cell at Wakefield prison by three Muslim inmates intent on revenge.

The former Liberian warlord Charles Taylor is also serving out his 50 year prison term in a UK jail.
Mladic will remain in the UN detention centre at Scheveningen, near the Hague, in the meantime. Any appeal will be dealt with by the successor court, the UN Mechanism for International Criminal Tribunals.

The hearing, broadcast live, was followed closely in Bosnia. The Bosnian prime minister, Denis Zvizdi, said the verdict confirmed that war criminals cannot escape justice regardless of how long they hide.

In Lazarevo, the Serbian village where Mladi was arrested in 2011, residents dismissed the guilty verdicts as biased. One, Igor Topolic, said: All this is a farce for me. He [Mladi] is a Serbian national hero.

Mladis home village of Bozinovici retains a street named after the former general, where he is praised as a symbol of defiance and national pride.

The trial is one of the last to be heard by the ICTY, which is to be dissolved at the end of the year.