The late-night announcement is part of Trump’s aggressive push to dismantle aspects of his predecessor’s signature health law after several failed attempts by Congress to repeal it earlier this year.

In a series of tweets Friday morning, Trump called on Democrats to reach out to him to “fix” the law, which he called a “broken mess.”

“The Democrats ObamaCare is imploding. Massive subsidy payments to their pet insurance companies has stopped. Dems should call me to fix!” he tweeted.

The move also puts the spotlight back on Congress, where lawmakers in both parties have urged the administration to continue the payments to stabilize the Obamacare markets in the short term.

While senior congressional Republicans oppose the payments themselves — they sued the Obama administration to stop them and have tried for years to repeal the underlying law altogether — there’s recognition of what ending them suddenly could do to the millions of Americans insured through the Obamacare exchanges.

Democrats have repeatedly pressed the administration for a longer term commitment that the payments would be made, but Trump has directed his advisers to keep them on a month-to-month basis, in part for negotiating leverage, according to sources with knowledge of the discussions.

Nearly 6 million enrollees, or 57%, qualify for the cost-sharing payments this year, according to the most recent data from the Department of Health and Human Services. The subsidies are expected to cost the federal government about $7 billion in 2017.

The uncertainty over the subsidies’ fate was a key reason that many insurers are substantially hiking their rates for 2018 — some by more than 20%. Several major carriers dropped out of the individual market, unwilling to wait and see what Trump and congressional Republicans would do.

White House press secretary Sarah Sanders said the decision was “based on guidance from the Justice Department.”

“The bailout of insurance companies through these unlawful payments is yet another example of how the previous administration abused taxpayer dollars and skirted the law to prop up a broken system,” Sanders said in a statement.

“It is a spiteful act of vast, pointless sabotage leveled at working families and the middle class in every corner of America,” said Senate Minority Leader Chuck Schumer and House Minority Leader Nancy Pelosi in a joint statement. “Make no mistake about it, Trump will try to blame the Affordable Care Act, but this will fall on his back and he will pay the price for it.”

“These (cost sharing reduction) payments are in fact illegal. The President said he is no longer going to engage in making these payments, so let’s move forward and do what we should have done a long time ago,” he said, later adding, “Obamacare is a mess and we need to replace the whole thing, repeal the whole thing.”

This was the second major move on Obamacare Thursday. Earlier in the day, Trump signed an executive order charging his administration with developing policies to increase health care competition and choice in order to cut prices. However, it could also destabilize Obamacare by siphoning off younger and healthier Americans from the exchanges.

What will Congress do?

Several top Republicans, including House Ways and Means Committee Chairman Kevin Brady and Sen. Lamar Alexander, the chairman of the chamber’s health committee, have called for a short term legislative solution to the issue in order to eliminate uncertainty that has been rattling health insurers for months.

“Cutting health care subsidies will mean more uninsured in my district. @POTUS promised more access, affordable coverage.,” Florida Rep. Ileana Ros-Lehtinen, a Republican who will be retiring at the end of this term, said in a Twitter post after the news broke Thursday night. “This does opposite.” 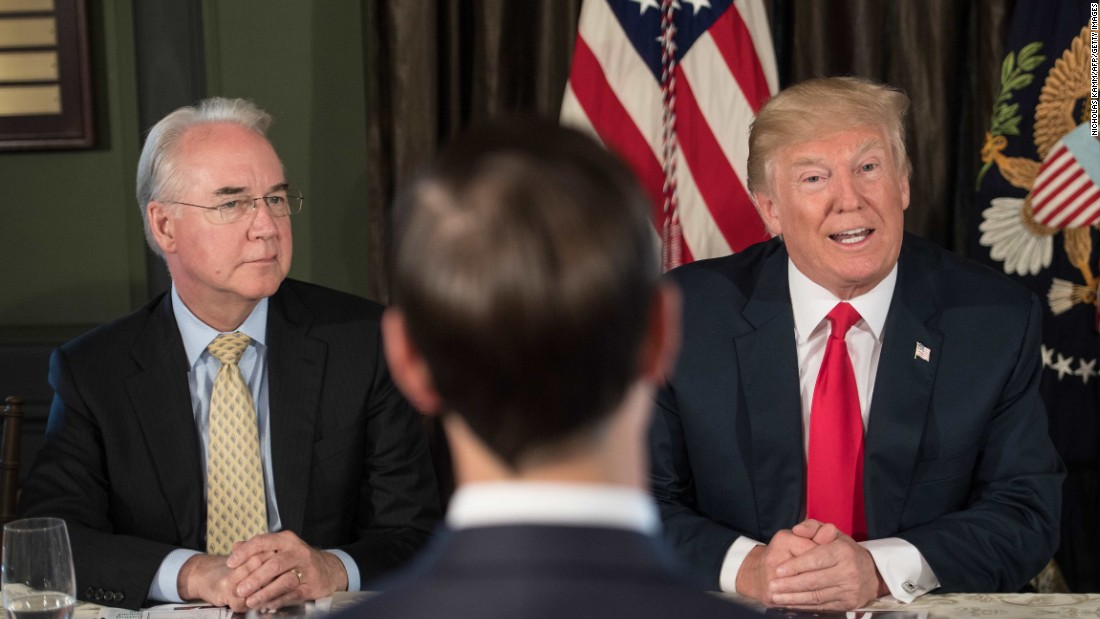 Alexander has been negotiating with his Democratic counterpart on the committee, Sen. Patty Murray of Washington, on a deal to fund the subsidies for two years in return for more regulatory flexibility for states for their insurance plans.

But up until now, those negotiations haven’t led to a deal — and there have been serious questions inside House and Senate leadership as to whether such a proposal could be brought to the floor, given the vociferous opposition from conservative members of the party opposed to any “fix” of Obamacare.

“Under no circumstance should Congress attempt to expand Obamacare by cutting a check for President Obama’s bailout of insurance companies,” tweeted GOP Rep. Mark Walker of North Carolina. “Instead, Congress must fulfill the promise to repeal and replace Obamacare with high-quality, patient-centered health care.”

December could be the month to watch.

Democrats are likely to demand funding in any spending package necessary to keep the government open after December 8.

But Trump’s move throws a new wrench into an eight week period fraught with potential problems, from finalizing the spending bill, to finding a solution for the Deferred Action for Childhood Arrivals program Trump also rescinded, all while attempting to accomplish Republicans’ cornerstone legislative effort: tax reform in the same period.

“Yes, this complicates things,” a GOP congressional aide acknowledged. “There is no question about that.”

Will costs go up?

What insurers do now remains to be seen.

Insurers have already signed contracts committing them to participating in 2018 and setting their rates. They must continuing offering the reduced deductibles and co-pays to eligible enrollees, but they won’t be paid for them. That’s why many asked for such large rate hikes.

Obamacare enrollees eligible to receive premium subsidies, which are not affected by Trump’s move, will continue to get discounted rates. But those who don’t could see their costs skyrocket again next year.

The action, however, is likely to spur many lawsuits. New York Attorney General Eric Schneiderman, who is part of a coalition defending the subsidies, swiftly announced that group would take action against Trump.