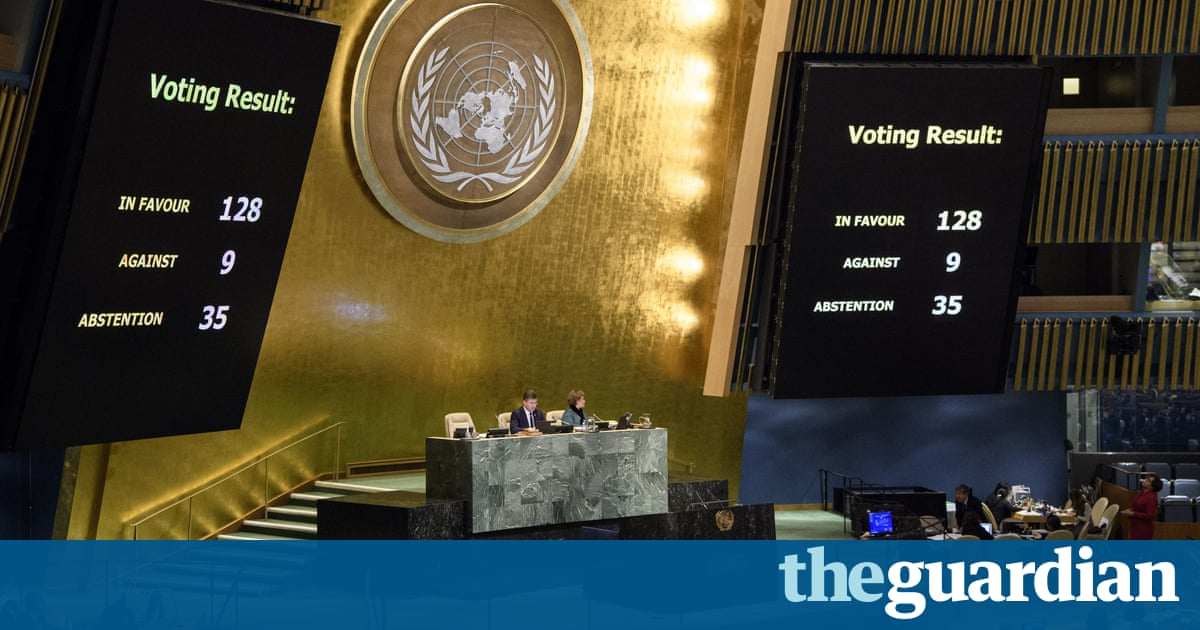 The United Nations general assembly has delivered a stinging rebuke to Donald Trump, voting by a huge majority to reject his unilateral recognition of Jerusalem as Israels capital.

The vote came after a redoubling of threats by Nikki Haley, the US ambassador to the UN, who said that Washington would remember which countries disrespected America by voting against it.

Despite the warning, 128 members voted on Thursday in favour of the resolution supporting the longstanding international consensus that the status of Jerusalem which is claimed as a capital by both Israel and the Palestinians can only be settled as an agreed final issue in a peace deal. Countries which voted for the resolution included major recipients of US aid such as Egypt, Afghanistan and Iraq.

Although largely symbolic, the vote in emergency session of the world body had been the focus of days of furious diplomacy by both the Trump administration and Israel, including Trumps threat to cut US funding to countries that did not back the US recognition.

But only nine states including the United States and Israel voted against the resolution. The other countries which supported Washington were Togo, Micronesia, Nauru, Palau, Marshall Islands, Guatemala and Honduras.

Twenty-two of the 28 EU countries voted for the resolution, including the UK and France. Germany which in the past has abstained on measures relating to Israel also voted in favour.

Thirty-five countries abstained, including five EU states, and other US allies including Australia, Canada, Colombia and Mexico. Ambassadors from several abstaining countries, including Mexico, used their time on the podium to criticise Trumps unilateral move.

Another 21 delegations were absent from the vote, suggesting the Trumps warning over funding cuts and Israels lobbying may have had some effect.

While support for the resolution was somewhat less than Palestinian officials had hoped, the meagre tally of just nine votes in support of the US and Israeli position was a serious diplomatic blow for Trump.

Israel thanks President Trump for his unequivocal position in favour of Jerusalem and thanks the countries that voted together with Israel, together with the truth, said a statement from Netanyahus office.

Speaking to the assembly before the vote, Haley who earlier in the week told members that the US would be taking names returned to the offensive.

I must also say today: when we make generous contributions to the UN, we also have expectation that we will be respected, she said. Whats more, we are being asked to pay for the dubious privileges of being disrespected.

In his own speech Israels UN ambassador, Danny Danon, said UN members who backed the resolution were being manipulated. You are like puppets pulled by your Palestinian masters, he told the session.

While Thursdays resolution was in support of existing UN resolutions on Jerusalem and the peace process, the clumsy intervention by Trump and Haley also made the vote a referendum on Trumps often unilateral and abrasive foreign policy.

The debate and vote highlighted for a second time in a week the international isolation of the United States over the Jerusalem issue, following a similar vote in the security council on Tuesday in which it was outnumbered 14-1.

The threatening US posture, which had been denounced as both counter-productive and bullying, only seemed to have hardened the resolve of countries in opposing Trumps 6 December move.

The resolution, co-sponsored by Turkey and Yemen, called Trumps recognition null and void and reaffirmed 10 security council resolutions on Jerusalem, dating back to 1967, including requirements that the citys final status must be decided in direct negotiations between Israel and the Palestinians.

It also demands that all states comply with security council resolutions regarding the holy city of Jerusalem, and not to recognise any actions or measures contrary to those resolutions.

Earlier on Thursday, as it had become clear that the US and Israel would be heavily defeated, Netanyahu preemptively denounced the vote calling the UN a house of lies.

The state of Israel rejects this vote outright, Netanyahu said. Jerusalem is our capital, we will continue to build there and additional embassies will move to Jerusalem.

Jerusalem is the capital of Israel, whether or not the UN recognises this. It took 70 years for the United States to formally recognise this, and it will take years for the UN to do the same.

Michael Oren, Israels deputy minister for diplomacy, called for Israel to cut its ties with the UN and expel the organisation from its Jerusalem offices.

We must evict the UN from the scenic Governors House, where its bloated staff does nothing, and give this historic site to a school, a hospital or best yet a new US embassy.