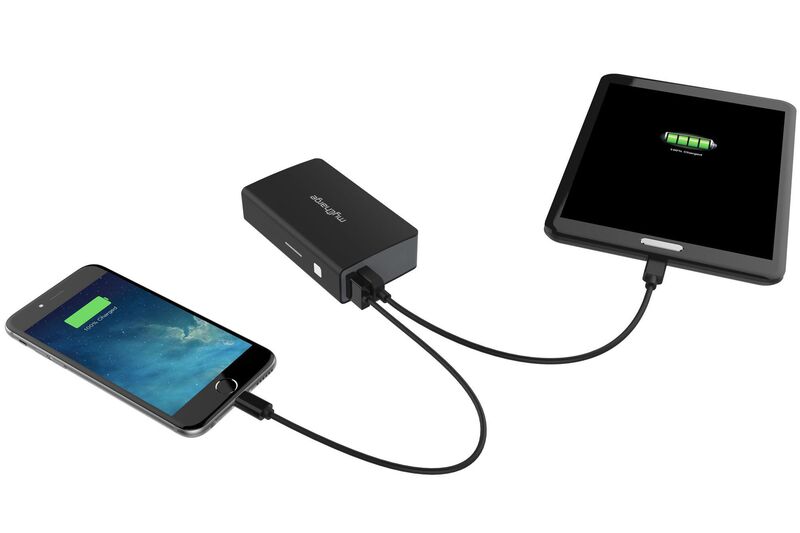 Explorer and conservationist Philippe Cousteau is the grandson of ocean-mapping legend Jacques. Co-founder of EarthEcho International, an environmental nonprofit aimed at inspiring young people to work on sustainability, he travels the world filming documentaries from Sumatra to South Africa.

In Cousteau’s latest show, the Travel Channel’s , he and his wife—former host Ashlan Cousteau—investigate stories of lost plunder across the Caribbean.

He travels about 200,000 miles a year, usually on United Airlines. “I get Economy Plus for up to half a dozen people traveling with me automatically, if they’re on the same ticket,” he says. “So everyone gets Economy Plus, and I don’t have to pay extra for it. I’m 6’4″, so the extra legroom makes a big difference.”

The couple live in Los Angeles.

The item he won’t travel without might surprise you

I love food, and with all the places I travel … well … the food is not always the best. So I like to pack a small camping container of salt and pepper. I was 17 years old and studying for a month in summer in Spain, and one of the things they don’t excel at there is the pepper you get in restaurants—it’s really dusty and tasteless. So I went and bought a little cracked pepper thing to carry with me. And in a lot of places it was just not very good salt, either. I don’t eat seafood, so Spain was always difficult for me, because it’s basically like, “Tortilla? Tortilla? Tortilla? Tortilla? Tortilla?” [One of Spain’s signature dishes is , a simple potato omelette.]  Over and over and over and over. So having a nice dash of decent salt and pepper on top just made it different enough. Since then, I’ve got a little [spice] kit I take everywhere with me: a small, zippered camping pouch filled with little Nalgene bottles. When I was filming in Mozambique with the BBC, we were in a tiny village for several days, and all there was to eat was rice and coconut. But I had the foresight to bring a little wasabi powder, which doesn’t go bad—you just mix it with a little bit of water and stir it in. It made all the difference.

In dangerous areas, he relies on nice watches

I was working on a project in Singapore, and an ex-[Special Air Service] soldier told me to always wear a nice watch: Don’t flaunt it, but have it with you. He had a stainless-steel Rolex and wore it everywhere. He told me that no matter where you travel, a good watch—like a Rolex—is like currency and is something you can always use to barter to get yourself out of trouble. You always hear “never have anything nice on expedition,” but that soldier’s advice was smart and practical so I always wear a “tradable” watch that can help get me out of a bind.

A good charger is worth more than gold

I always plan for the worst, so I always have a battery charger from MyCharge. It’s the best one I’ve found, and I’ve gone through a lot of ’em. It’ll charge a tablet and a phone a couple of times, and it plugs straight into the wall, so you can use it as a charger in your hotel room. It’s a battery and plug, all in one.

I’m picky about food. When I go somewhere, I have some anxiety until I know there’s somewhere I can get a decent meal. So I do a lot of research, but I sometimes also employ a cheeky trick. Find a nice hotel, even if you’re not staying in one. The concierge there will usually be really helpful and knowledgeable. Say, “I’ve just checked out, I’m leaving. I’m going to the airport, and I’d like a nice last meal. What do you recommend?” One of the best meals I’ve ever had was in Frankfurt, on a 12-hour layover on my way to Mozambique. I didn’t have anywhere to stay, so I wandered around and into a five-star hotel. I still have the restaurant the concierge recommended in the contacts in my phone as “amazing restaurant in Frankfurt.”

Why you should ask to use the bathroom at a restaurant, even if you don’t need to use it

I look at menus in restaurants. A red flag for me is an enormous menu—it’s jack of all trades, master of none. You can’t be good at a hundred different things, so if it’s a really long menu—25 entrees or something—I avoid it. Especially in countries that don’t necessarily have the mandatory sanitation standards we employ here, there’s another trick if you have any doubts about eating somewhere. Ask to use the bathroom first. You can see how clean that is, but you can usually take a peak around the corner into the kitchen to see if the floor looks clean.

I was in Papua New Guinea when I was 16 years old, working with a woman called Dr. Eugenie Clark on an expedition; she was a shark expert. We were on the southeastern part of the country, out on a little dive boat doing research all day, diving in shallow water. It was an amazing experience that really allowed me to connect with my grandfather’s legacy. Then I got into [the capital] Port Moresby, which was an extremely dangerous city where you’re never supposed to leave your hotel unescorted. But I was 16, and what 16-year-old doesn’t make poor decisions? So I go for a walk, and these three guys start chasing me. They were called rascals, and notorious for killing you before mugging you. I honestly saw my life flashing before my eyes. I was like, “I’m gonna die a virgin. That would not be good.” But then I ran into three cops [who saved my life] . After that, I went into the highlands of New Guinea, with some local indigenous tribes, and I saw a mask they’d carved for sale in a little shop. I thought, This is a life-changing experience. I’m going to get this mask as a memento. Most indigenous cultures will have a culture of masks, so ever since then I’ve looked for those when I travel. We have a wall in our apartment with them all hung up. I write on the back of each one what year it was and where it was from.