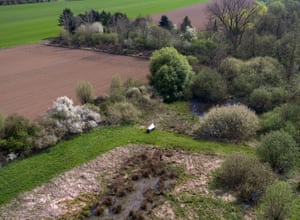 The malaise traps set in protected areas and reserves, which scientists say makes the declines even more worrying. Photograph: Courtesy of Courtesy of Entomologisher Verein Krefeld

When the total weight of the insects in each sample was measured a startling decline was revealed. The annual average fell by 76% over the 27 year period, but the fall was even higher 82% in summer, when insect numbers reach their peak.

Previous reports of insect declines have been limited to particular insects, such European grassland butterflies, which have fallen by 50% in recent decades. But the new research captured all flying insects, including wasps and flies which are rarely studied, making it a much stronger indicator of decline.

The fact that the samples were taken in protected areas makes the findings even more worrying, said Caspar Hallmann at Radboud University, also part of the research team: All these areas are protected and most of them are well-managed nature reserves. Yet, this dramatic decline has occurred.

The amateur entomologists also collected detailed weather measurements and recorded changes to the landscape or plant species in the reserves, but this could not explain the loss of the insects. The weather might explain many of the fluctuations within the season and between the years, but it doesnt explain the rapid downward trend, said Martin Sorg from the Krefeld Entomological Society in Germany, who led the amateur entomologists.

Goulson said a likely explanation could be that the flying insects perish when they leave the nature reserves. Farmland has very little to offer for any wild creature, he said. But exactly what is causing their death is open to debate. It could be simply that there is no food for them or it could be, more specifically, exposure to chemical pesticides, or a combination of the two.

In September, a chief scientific adviser to the UK government warned that regulators around the world have falsely assumed that it is safe to use pesticides at industrial scales across landscapes and that the effects of dosing whole landscapes with chemicals have been largely ignored.

The scientists said further work is urgently needed to corroborate the new findings in other regions and to explore the issue in more detail. While most insects do fly, it may be that those that dont, leave nature reserves less often and are faring better. It is also possible that smaller and larger insects are affected differently, and the German samples have all been preserved and will be further analysed.

In the meantime, said De Kroon: We need to do less of the things that we know have a negative impact, such as the use of pesticides and the disappearance of farmland borders full of flowers.