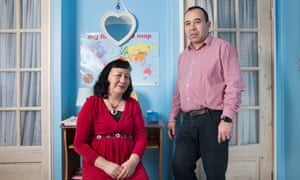 We thought we had done well and it was time we paid something back to society: Homayun and Parvin. Photograph: Karen Robinson for the Observer

Two years ago Homayun, who came to the UK from Afghanistan in 1979, was watching the news when he saw the footage of a three-year-old Syrian boy washed up on a beach in Turkey. I thought to myself that we had done well in this society. We had been educated, got jobs and we also had a spare room. It was time we paid something back to society.

So he and his wife, Parvin, 44, applied to become foster carers. The process took 12 months and, at the start of this year, they welcomed two boys from Afghanistan and Kuwait now 15 and 12. We would have welcomed children from anywhere, including Britain, says Homayun, but I was especially interested in caring for children from war-torn countries because that was the experience I had been through.

Homayun, 51, owns a garage business and the couple have their own son, 16. My father was an activist and he was under house arrest, he says. We fled to Britain a few months before the Russians invaded the country. I know what it is like to live in a country that doesnt have freedom, human rights and a right to education I had that in common with the boys we were fostering. His Afghan foster son had travelled from Afghanistan to Iran and then to Turkey, where he had boarded a boat to Greece. From there he travelled to France before finally reaching Britain. His Kuwaiti foster son had been smuggled on to a plane using false identification. When he first met them Homayun was struck by how quiet the children were.

They would not speak and it took a few months to bring them out of themselves and get them to open up. The boys did not speak each others languages and relied on Google Translate. It was very challenging and difficult at first, says Homayun. But now the younger boy goes to school on his own, and uses public transport.

Although they share the same Muslim background, he would never force his own beliefs on his foster children. If I had a Christian child and they wanted to go to church, I would take them to church. If I had a Jewish child who wanted to go a synagogue, I would make sure they go there.

Homayun also encourages them to talk to their families back in their own countries. In Afghanistan the parents talk to their son regularly via Skype. They want him to receive something here that he never had there an education, he says. Leaving Afghanistan is a gamble; sometimes it pays off and other times it doesnt and parents can lose their children.

Both boys now call him Uncle or Baba and are starting to speak English well. If they can leave my house and go and achieve something in their lives, says Homayun, something that they could not have done in their own countries, that would be a satisfying job done.

Homayun chose to foster as a way of giving something back to society, but in fact both he and his wife found that the experience has enriched all of them in ways they could not have predicted.

Their son, who has autism, is now learning to share and communicate, and has started speaking in sentences. He enjoys having the two boys in the house and they go cycling and play football, he says. Fostering has done the whole family so much good.