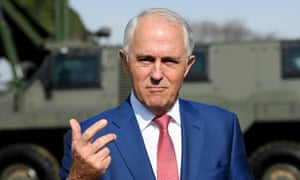 Prime minister Malcolm Turnbull wants Australia to be one of the worlds biggest weapons exporters, saying it will support high-end manufacturing jobs and support the capability of the Australian defence force. Photograph: Dan Himbrechts/AAP

Australia is set to become one of the worlds largest arms exporters under a controversial plan of the Turnbull governments.

The prime minister, Malcolm Turnbull, has unveiled a new defence export strategy setting out the policy and strategy to make Australia one of the worlds top 10 weapons exporters within the next decade.

Hailing it a job-creating plan for local manufacturers, the Coalition says Australia only sells around $1.5bn to $2.5bn in defence exports a year and it wants the value of those exports to increase significantly.

It has identified a number of priority markets: the Middle East, the Indo-Pacific region, Europe, the United States, the United Kingdom, Canada and New Zealand.

It will set up a new Defence Export Office to work hand in hand with Austrade and the Centre for Defence Industry Capability to coordinate the commonwealths whole-of-government export efforts, and provide a focal point for more arms exports.

A $3.8bn Defence Export Facility, to be administered by the Export Finance and Insurance Corporation (Efic), will provide the finance local companies need to help them sell their defence equipment overseas.

It is an ambitious, positive plan to boost Australian industry, increase investment, and create more jobs for Australian businesses, Turnbull said in a statement.

A strong, exporting defence industry in Australia will provide greater certainty of investment, support high-end manufacturing jobs and support the capability of the Australian defence force.

The controversial plan has been anticipated since mid-2017 when Christopher Pyne, the defence industry minister, said he wanted to start selling far more Australian-made weapons overseas.

At the time, Tim Costello, the World Vision Australia chief advocate, attacked the plan, saying the government had cut humanitarian aid which saved lives while simultaneously discussing the merits of becoming a major weapons manufacturer and exporter. The government says this is an export and investment opportunity, but we would be exporting death and profiting from bloodshed, Costello said last year. There is only one purpose in making a weapon and that is to kill someone with it. Do we really want that to be what people think of when they see the brand made in Australia?

Costello said at the time that the contemporary Syrian war now in its eighth year could not have lasted for more than a year without armaments profiteering. As a result, there had been more than 300,000 people killed, including thousands of children, 13.5 million people in need of humanitarian assistance, 6.3 million people internally displaced and five million people turned into refugees.

Defence industry minister Christopher Pyne says he wants Australia to become a major arms exporter on par with Britain, France and Germany and use exports to cement relationships with countries in volatile regions such as the Middle East. Is it really a good idea to sell weapons in a volatile region? he said.

The government will set aside $20m a year to implement the strategy, including $6.35m to implement strategic multi-year export campaigns, an additional $3.2m to expand the Global Supply Chain program, and an additional $4.1m for grants to help build the capability of small and medium enterprises to compete internationally.

It will give Australian defence companies the support they need to grow, invest and deliver defence capability.

It will make Australian defence exports among the best in the world.

Between 2012 and 2016, the 10 largest arms exporters were, in order: the United States, Russia, China, France, Germany, the United Kingdom, Spain, Italy, Ukraine and Israel.

Australia was the 20th largest arms exporter during that period, according to the Stockholm International Peace Research Institute.