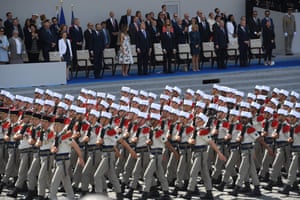 In the past, Eaton noted, Trump has praised the tactics of autocrats such as Saddam Hussein and Vladimir Putin. He added: Unfortunately, we do not have a commander in chief right now as much as have a wannabe banana republic strongman.

Richard Painter, former White House ethics lawyer for George W Bush, tweeted: Cool. Just like in North Korea and Russia. But what do we do about those traitors who dont clap during our Dear Leaders speech? a reference to Trumps criticism of Democrats who did not applaud during his state of the union address.

And journalist Joy Reid wrote on Twitter: Oh my god … he wants to be Kim Jong-un.

A date for the event has not yet been chosen. Options include Memorial Day on 28 May, Independence Day on 4 July and Veterans Day on 11 November, which would coincide with the 100th anniversary of the end of the first world war. If the route includes Pennsylvania Avenue, it would pass by Trumps controversial hotel.

But the Post added: The cost of shipping Abrams tanks and high-tech hardware to Washington could run in the millions, and military officials said it was unclear how they would pay for it.

Thomas Crosson, a spokesman for the Pentagon, said: We are aware of the request and are in the process of determining specific details. We will share more information throughout the planning process.