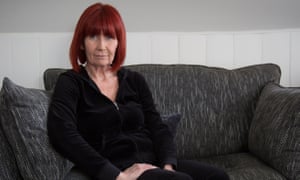 Ruth Lane, the widow of Don Lane, who was a courier with DPD at its Bournemouth depot. Photograph: Richard Crease/BNPS

Ruth Lane told the Guardian: There was a constant threat of a fine. They had to deliver the parcels to tight slots and the pressure to get them done was huge. He was putting the company before his own health. He wasnt able to do his parcels first and make the hospital appointments, so he would cancel on the day.

He collapsed in January 2017 and they knew that because they collected his van. It was after that Don cancelled three appointments. DPD had a duty of care to make sure he got to those appointments, but they failed in it. She added that in March her husband had told her: I think I am going to die.

Lanes death comes as concern mounts at the human cost of the gig economy, which accounts for 1.1 million people, many working as couriers and minicab drivers. It is likely to increase pressure on the government to make meaningful reforms to employment law in a delayed announcement on modern working practices expected this week.

Trade unions last night said the government must crack down on bogus self-employment. The TUC general secretary, Frances OGrady, said: The insecure work free-for-all has to end this will be a real test of Theresa Mays government. Does she even have a domestic agenda any more?

DPD, one of the most successful firms operating in the gig economy, made over 100m profit after tax in 2016. Both it and Hermes, another parcel company relying on self-employed couriers, are facing employment tribunal claims from people who believe they should be treated as employed.

Field described Lanes death as a new low for the gig economy and called on Theresa May to urgently introduce new legislation to protect this small army of workers at the bottom of the pile who are being badly exploited.

Lane disputed the 150 charge in July, insisting that he had told his bosses about the appointment months earlier. According to correspondence seen by the Guardian, he told his manager: I have cancelled so many appointments because I couldnt make the time to get there that the renal department have stopped treating me. I had to go.

His DPD area manager replied: I fail to understand why a full day off was required and as such do not see that the breach [the 150 fine] should be rescinded.

During the appointment, doctors found Lanes blood pressure and cholesterol were high, he had anaemia and rising levels of creatine in his kidneys, a warning sign of renal failure. In September 2017 he collapsed into another diabetic coma.

In the days before he died, he was feeling sick and vomiting blood, Ruth said, adding that he told her: I really dont want to work, but I have to.. They are like employees, not self-employed, she said.

A colleague, who asked not to be named for fear that DPD would terminate his contract, said: Don was falling apart, but they wouldnt take it easy on him. They push drivers till they break. I definitely think they contributed to this. They knew Don was diabetic. They should have looked after him more.

DPD said in a statement that it was profoundly sorry that it had charged Lane, but cited confusion at the time. Don attended his appointment, but it isnt clear why he was then charged, when the charge hadnt been been applied at any other time, it said. We got it wrong on that occasion.

Lane first collapsed on 27 December 2016 and Ruth texted his manager to say: he knows he has to come into work tomorrow as hell get charged. On that occasion, the manager responded that he has no worries about being charged.

In relation to Dons poor health at the end of December 2016 and into January 2017, we refute the claim that he was under pressure and threatened with a 150 charge, DPD said. It said that it monitored Lanes health during 2017 but did not know that he had suffered another diabetic coma in September. It said he had a quiet rural route with a relatively small number of deliveries, which suited him as it was convenient for his hospital appointments.

In the runup to Christmas, it is normal in the industry for drivers to work additional days at the weekend and Don was working his normal route, DPD said. We werent made aware that Don was feeling sick and vomiting up some blood at this time. We were shocked and hugely saddened by Dons death and our thoughts go out to his family and friends at this difficult time.

DPD said its drivers do not have to provide the service personally, and drivers have the option of providing a substitute driver in the event of sickness. Don was aware of the need to provide a substitute. It said if a driver cannot find a substitute, it tries to reallocate the route among other drivers.

DPD uses around 5,000 self-employed couriers. They are under pressure to deliver parcels to restricted time slots, must wear a uniform, hire a DPD liveried van and not work for any other courier company. MPs and unions have argued that these strict conditions mean they are bogusly self-employed and should be treated as employed workers. Courier companies using self-employed drivers, including ParcelForce and UK Mail, have also sparked anger by levying fines if rounds are not covered.

DPD said that it charged fines in 4.6% of the cases where couriers did not provide a service, but declined to say how much it raised because this information was operationally sensitive.

How can modern Britain allow workers who are dedicated to their job to be driven to an early grave by such appalling exploitation? said Field. DPD have been told time and again that their punitive regime is totally unjust, particularly as their workers are labelled self-employed. Such mistreatment of workers smacks of sweated labour from the Victorian era.