George Soros said President Donald Trump is risking a nuclear war with North Korea and predicts that the groundswell of opposition he’s generated will be his downfall.

“I consider the Trump administration a danger to the world,” the billionaire investor said in a speech from Davos, Switzerland. “But I regard it as a purely temporary phenomenon that will disappear in 2020, or even sooner.” He expects a Democratic “landslide” in the 2018 elections.

Soros, the 87-year-old chairman of Soros Fund Management, said his Open Society Foundations are spending more than half of their budget “closer to home” rather than in the developing world, in an effort to protect democracy. While he said the strength of institutions will help prevent Trump from succeeding, Soros counted nuclear war and climate change as greater threats to civilization.

The billionaire former hedge fund manager, speaking Thursday at the World Economic Forum, also struck at social-media companies Facebook Inc. and Google in the speech, comparing them to gambling companies that foster addiction among users, and called cryptocurrencies a typical bubble.

Here are some of the highlights from his speech:

“Mankind’s ability to harness the forces of nature, both for constructive and destructive purposes, continues to grow while our ability to govern ourselves properly fluctuates, and is now at a low ebb,” Soros said. “The survival of our entire civilization is at stake.” 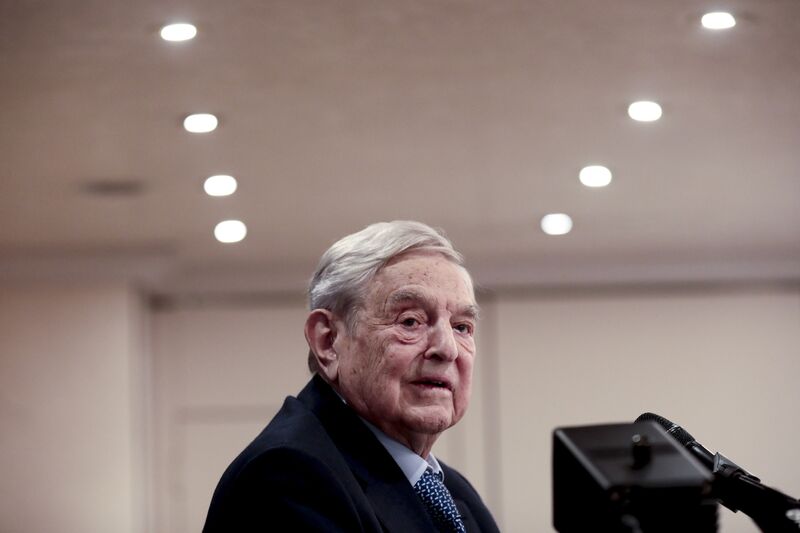 The U.S. must accept North Korea as a nuclear power, and then cooperate and negotiate with China to establish an alliance that’s better equipped to confront the nation, he said. His comments come amid heightened trade tensions between the world’s two biggest economies.

Soros said social-media companies Facebook and Google “deliberately engineer addiction to the services they provide.” He said the “network effect” that has propelled these companies to dominance is “unsustainable” and predicted that Facebook will “run out of people to convert in less than three years.”

The money manager, whose family office owned a small stake in both companies as of Sept. 30, also criticized social-media organizations for exploiting the data they control and called them a “menace” to society that needs more oversight.

“The fact that they are near-monopoly distributors makes them public utilities and should subject them to more stringent regulations, aimed at preserving competition, innovation, and fair and open universal access,” he said.

Read more on Soros’s view of the tech companies here

Cryptocurrencies are a bubble and aren’t stable stores of value, the legendary macro trader said in response to an audience question after his speech. But he doesn’t see them crashing because of their use by authoritarian regimes in the world.

“As long as you have dictatorships on the rise, you will have a different ending, because the rulers in those countries will turn to Bitcoin to build a nest egg abroad,” Soros said.

He was more positive about the blockchain technology behind Bitcoin, noting that his Open Society Foundations are using such technology to help migrants communicate with their families and keep their money safe.

Soros also pointed in his speech to the rise of nationalism, particularly within the EU, which he said needs to be “radically” reinvented in order to regain support. He reiterated his view that the EU should avoid creating a core Europe along the lines of the euro area. He added that he’d like to see Britain remain a member of the EU, or eventually rejoin it.

Soros’s predictions at last year’s conference in Davos were also gloomy and bearish on Trump, and have yet to pan out. He said that the stock market rally would soon come to an end. Since then, the Standard & Poor’s 500 Index has rallied almost 30 percent. He said that China’s growth rate was probably unsustainable, and that the nation would probably fail to change its growth model in the next two years. Instead, growth in China has continued to accelerate even as authorities clamped down on excessive debt.