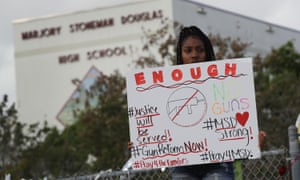 Its not that Jones doesnt want to hear from students at all. The site, and Jones show, has highlighted commentary from a witness who claimed that there was a second shooter, and gave a lot of airtime to another who bolstered Joness now-reflexive false flag take on any given massacre. They just dont want to hear from any who think that others should be spared the trauma they have endured through some measure of gun control.

Another approach was to find individual survivors of this massacre who did not happen to support the call from a large number of their classmates for gun control. The Daily Wire managed to find a pro-gun Marjory Stoneman student who accused the media of politicizing the massacre to talk about gun control. Glenn Becks outfit, The Blaze did their best to extract criticism of the FBI, not Trump, from one students CNN interview.

Others reached back into history to feature the wisdom of survivors of massacres in the more distant past. The Washington Times spoke to Columbine survivor and Colorado Republican Patrick Neville, who wants to remove restrictions on concealed carry in K-12 schools. His thoughts were reliably disseminated by Breitbart and other outlets.

The Federalist, a would-be purveyor of considered debates, considers itself a cut above such vulgar attacks instead, under the guise of big tent commentary, they featured writers who have merely tried to undermine the students credibility by claiming they have no special status in the debate. On Monday, Chandler Lasch complained on the site that Media tends to treat survivors like Hogg as if they are policy experts Yet enduring tragedy does not make anyone a source of wisdom on legislation.

Just because your school has been shot up by a disturbed young man with a semi-automatic weapon, the logic seems to run, you dont deserve a more extensive hearing than a Hillsdale College student, hundreds of miles away.

Talk radio heavyweight Rush Limbaugh also likes to affect a certain gravitas. He was invited to discuss the massacre, and the students activism, on Fox News Sunday. Speaking to Chris Wallace, he defended the status quo, and recommended that more guns be introduced to schools to defend them from mass shooters. He lubricated the message with a few crocodile tears about the students pain.

Conservative movement stalwart the National Review is similarly fastidious but theyll reliably put their shoulders to the wheel to prevent measures that might lessen the incidence of large scale, random slaughter. Ben Shapiro spat out a would-be demolition of the students, and the left, arguing that their activism should be dismissed because in adolescence, the emotional centers of the brain are overdeveloped in comparison with the rational centers of the brain.

Dan McLaughlin, who has long blogged and tweeted under the moniker of The Baseball Crank, added that if you have ever been, or known, a teenager, you know that even comparatively well-informed teens are almost always just advancing arguments theyve heard from adults.

Even, it seems, teens who have recently been shot at by a mass murderer.