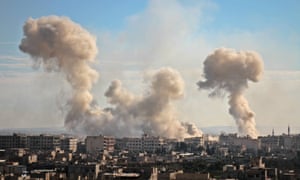 The Syrian civil defense, a search and rescue organisation, said 61 people were killed on Tuesday alone, while the Syrian Observatory for Human Rights, a UK-based monitor, said 194 people had died in the last 48 hours a toll that encapsulated the unbridled violence of the war in Syria. After seven years and interventions by regional and global powers, the humanitarian crisis has heightened instead of abating, as forces loyal to Assads regime and his Russian and Iranian backers seek an outright military victory instead of a negotiated political settlement.

Exact death tolls were difficult to obtain owing to ongoing rescue operations and because some families buried their dead without taking them to local hospitals.

Rebel groups responded with a wave of artillery bombardment targeting Damascus, killing 12 people and wounding 50 in government-controlled areas, according to the Observatory.

Aid workers said the latest violence in eastern Ghouta, where 1,300 people died in 2013 after the Assad regime deployed sarin gas, has included the use of notorious barrel bombs. The weapons are so inaccurate that their use is seen as a war crime by human rights watchdogs. The regime has also used fighter jets and artillery bombardment, on top of the punishing siege.

The situation in eastern Ghouta is akin to the day of judgment, said Mounir Mustafa, the deputy director of the White Helmets, the volunteer group that rescues people from under the rubble of bombed buildings.

The White Helmets said one of its volunteers, Firas Juma, died on Monday while responding to a bombing.

In Geneva, the UN childrens fund issued a blank statement to express its outrage at the casualties among Syrian children, saying it had run out of words.

Medical organisations said at least five clinics and hospitals, including a maternity centre, were bombed on Monday, some of them multiple times. An anaesthetist was killed in the attacks. Another two facilities were hit on Tuesday.

The bombing was hysterical, said Ahmed al-Dbis, a security official at the Union of Medical and Relief Organisations (UOSSM), which runs dozens of hospitals in areas controlled by the opposition in Syria. It is a humanitarian catastrophe in every sense of the word. The mass killing of people who do not have the most basic tenets of life.

Mark Schnellbaecher, the Middle East director for the International Rescue Committee, said: Once again we are seeing civilians in Syria being killed indiscriminately. Once again we are seeing medical facilities attacked. We have long feared eastern Ghouta will see a repeat of the terrible scenes observed by the world during the fall of east Aleppo and these fears seem to be well founded.

Sonia Khush, an official with Save the Children, described the situation as absolutely abhorrent.

The bombing has been relentless, and children are dying by the hour, she said. These families have nowhere left to run they are boxed in and being pounded day and night.

Elsewhere in Syria on Tuesday, pro-government fighters started entering the northern Kurdish enclave of Afrin, where Turkish troops have been on the offensive for a month. The development came a day after Turkey said it would hit back at the troops if their goal was to protect the Kurdish fighters.