Elon Musk’s rocky rapport with President Donald Trump appears to be on the mend, and it only took 5 million pounds of thrust to patch things up.

Musk’s Space Exploration Technologies Corp. pulled off a seemingly impossible feat Tuesday when it launched the world’s most powerful rocket in 45 years, then flew two of its spent boosters back to the Florida coast for a spectacular, simultaneous recovery on land. Musk then pulled off something perhaps even more surprising — winning public praise from the White House.

“Congratulations @ElonMusk and @SpaceX on the successful #FalconHeavy launch,” Trump tweeted late Tuesday. “This achievement, along with @NASA’s commercial and international partners, continues to show American ingenuity at its best!”

Musk, who was born in South Africa and has since obtained U.S. citizenship, thanked the president in a reply, noting that “an exciting future lies ahead.”

The 37-word exchange between the two billionaire businessmen is a step forward in their shaky relationship. Musk, who initially served on two of Trump’s White House advisory councils, stepped down in June after the president’s decision to withdraw from the landmark Paris climate accord. But the palpable excitement of the launch appeared to leave Trump and more than 2.3 million concurrent viewers on a YouTube webcast on the edge of their seats.

With hordes of fans gathered along the Florida space coast, the new rocket rumbled aloft under clear skies shortly after 3:45 p.m. local time. The live-stream of the Falcon Heavy Test Flight was the second-most-watched in YouTube’s history, and the launch led all three television network broadcasts in the U.S. Tuesday evening.

Falcon Heavy cleared the launch pad without blowing up — a feat Musk had said would be enough to deem the mission a win — and continued on to deliver Musk’s cherry red Tesla Roadster with a space-suit wearing mannequin at the wheel toward an Earth-Mars elliptical orbit around the sun.

“It seems surreal to me,” said Musk, 46, during a post-launch press conference. “Crazy things can come true.”

Musk said on Twitter late Tuesday the payload’s trajectory had “exceeded Mars orbit and kept going to the Asteroid Belt.”

Falcon Heavy, with three boosters and 27 Merlin engines, makes SpaceX a competitor to United Launch Alliance’s Delta IV Heavy, a workhorse for large U.S. military payloads. Its 5 million pounds of thrust are the most since the Saturn V used for Apollo moon missions in the late 1960s and early 1970s. The National Aeronautics and Space Administration and rival Boeing Co. were among those congratulating SpaceX on the launch.

“A private company just outperformed every government on earth,” said Greg Autry, a professor at the University of Southern California and a former NASA White House liaison. “This is bigger than anything Russia or China is doing. No one else is even close.”

The strides Musk has made rendering Falcon 9 launches more routine — SpaceX pulled off a record 18 launches last year– has helped make it one of the word’s most richly valued private companies.

Following the Falcon Heavy launch, SpaceX accomplished a feat never before seen in space history, re-landing two rocket cores back on earth. Two touched down on land in tandem; the third center core that was slated to settle on an unmanned drone ship ran out of propellant needed to slow down the descent and slammed into the ocean instead. 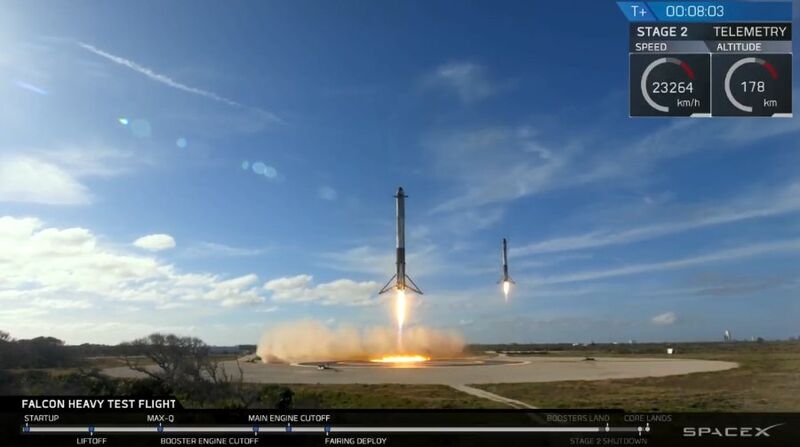 “The center core didn’t land on the drone ship,” said Musk, who said early reports are that the rocket booster “hit the water at 300 miles per hour and sprayed the drone ship with shrapnel.”

Hawthorne, California-based SpaceX already has paying customers committed to flying with Falcon Heavy, including commercial satellite operators Arabsat, Inmarsat and Viasat, according to its launch manifest. The U.S. Air Force also chose Falcon Heavy for its STP-2, or Space Test Program 2, mission, though the vehicle still needs to go through certification.

Musk outfitted his Roadster with cameras to capture views of the car as it floated through space, but the batteries were only expected to last for roughly 12 hours. Behind the wheel was “Starman,” clad in the same space suit that astronauts will wear during SpaceX’s Crew Dragon flights to the International Space Station. Musk said that Crew Dragon is now the company’s top priority, with the first demo flights slated for later this year. 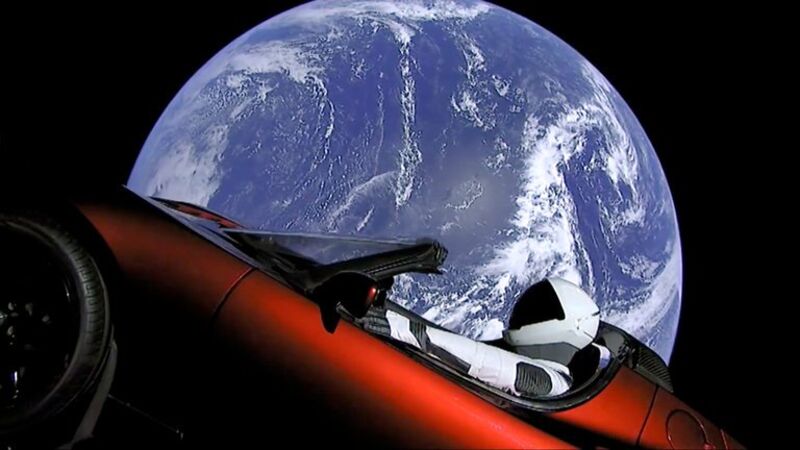 A nearly indestructible disk carrying a digital copy of Isaac Asimov’s science fiction book series, Foundation, is also on board, along with a plaque engraved with the names of SpaceX’s 6,000 employees.

The successful test flight means that SpaceX can move forward with Falcon Heavy missions for paying customers, with the first to take place within three to six months.

Musk founded SpaceX in 2002 and has led the company since the beginning. Falcon Heavy was developed without any government funding, and took far longer than originally planned.

“We tried to cancel the Falcon Heavy program three times because it was way harder than we thought,” said Musk. “Our total investment is over half a billion.”