President Donald Trump defended his decision not to release the Democratic rebuttal of a Republican memo that alleged bias and misconduct by the FBI and Justice Department early in their investigation of Russian election interference, saying on Twitter that the document was “very political.”

“The Democrats sent a very political and long response memo which they knew, because of sources and methods (and more), would have to be heavily redacted, whereupon they would blame the White House for lack of transparency,” Trump said in a tweet. “Told them to re-do and send back in proper form!” 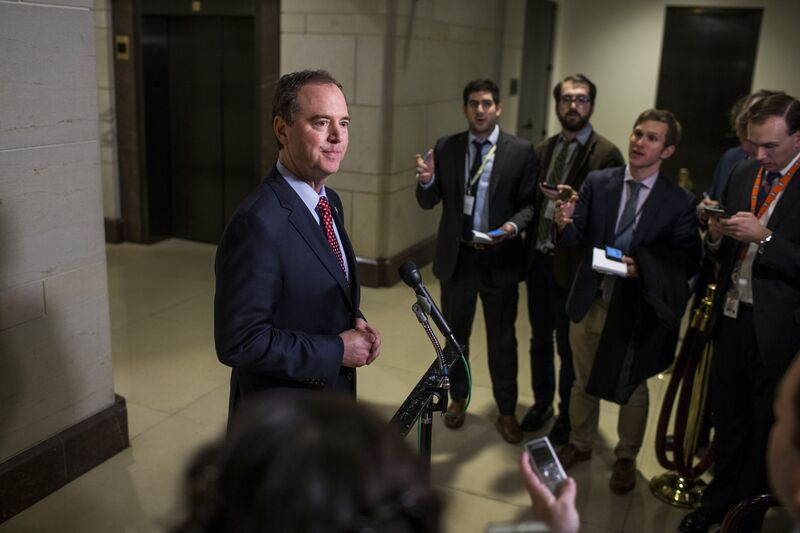 The memo’s author, Democratic Representative Adam Schiff, fired back. “Mr. President, what you call ‘political’ are actually called facts, and your concern for sources and methods would be more convincing if you hadn’t decided to release the GOP memo (“100%”) before reading it and over the objections of the FBI,” the California lawmaker said on Twitter.

Trump was unable to release the memo because it contained “numerous properly classified and sensitive passages, White House counsel Donald McGahn said late Friday. In a letter to Republican Representative Devin Nunes of California, chairman of the House Intelligence Committee, McGahn said the Justice Department concluded that portions of the memo were highly sensitive.

“The president’s double standard when it comes to transparency is appalling,” he said in a statement late Friday. “The rationale for releasing the Nunes memo, transparency, vanishes when it could show information that’s harmful to him.”

Schiff, the panel’s top Democrat, said that Trump was treating the 10-page document differently from the four-page Republican version commissioned by Nunes that was released last week. He said the committee would review the concerns expressed by the FBI and Justice Department.

“After ignoring urging of FBI & DOJ not to release misleading Nunes memo because it omits material facts, @POTUS now expresses concerns over sharing precisely those facts with public and seeks to send it back to the same Majority that produced the flawed Nunes memo to begin with,” Schiff tweeted late Friday.

Nunes said in a statement that “Intelligence Committee Republicans encourage the minority to accept the DOJ’s recommendations and make the appropriate technical changes and redactions so that no sources and methods are disclosed and their memo can be declassified as soon as possible.”

The decision to block the Democratic memo is a political risk for Trump, who claimed the Republican-authored version vindicated his claims of unfair political influence in investigations at the Justice Department. He approved the release of the GOP memo over the objections of FBI Director Christopher Wray, according to a person familiar with the matter.

Schiff had submitted the memo to the FBI and Justice Department so they could vet it for sensitive information.

The White House released a letter from Wray and Deputy Attorney General Rod Rosenstein that said they have given details to the intelligence panel about which portions of the Democratic memo are too sensitive to release.

The decision to completely block the memo’s release — rather than redact particular excerpts objected to by law enforcement and intelligence agencies — could give further ammunition to critics who say the president is politicizing the process.

Fact-Checking the Disputed Republican Memo on the Russia Probe

Already, the White House was grappling with the sense the original Republican document had done little to change the narrative on the Russia investigation, which has proven a chronic issue during Trump’s first year in office. In a Quinnipiac University poll released this week, 56 percent of Americans said they saw Special Counsel Robert Mueller’s inquiry into Russian involvement in the 2016 election as fair — down just 3 points from the previous month.

Democrats on the House Intelligence Committee have several options. They could accept Trump’s offer for help from the Justice Department to scrub the memo of sensitive information. Under the obscure rule the panel is using to release both memos, known as Rule X, they could also call for a vote on releasing it over the objections of the president. But that would require the support of Republicans on the panel.

The dueling memos both examine the origins of the Russia inquiry, including how the FBI obtained a surveillance warrant for Carter Page, a low-level Trump campaign adviser. Much of the underlying evidence, including the warrant application, remain classified.

Schiff’s memo challenges a Republican assertion that the FBI based its surveillance application almost entirely on an unverified dossier paid for by Trump’s political opponents, including Hillary Clinton, and that it kept the dossier’s origins from the court that approved the warrant. Democrats say the court was informed that a former British spy, Christopher Steele, who assembled the dossier, was politically motivated.

The Democratic memo also says that the FBI had other legitimate evidence that prompted the investigation into possible links between Trump associates and Russia.

The rebuttal was the latest Democratic volley against a Republican assault on the legitimacy of the government’s Russia investigation. Schiff and other Democrats say the Republicans are trying to undermine the Mueller inquiry.

House Oversight Chairman Trey Gowdy, an Intelligence Committee member who wrote the Republican memo, said earlier this week on Fox News that Democrats may have purposely included classified or sensitive information in their rebuttal.

“I think the Democrats are politically smart enough to put things in the memo that require either the bureau or the Department of Justice to say it needs to be redacted. Therefore, it creates this belief that there’s something being hidden from the American people,” Gowdy said.

In response, Schiff told Bloomberg News, “That’s their spin,” referring to Republicans. He said of his memo, “It sets the context. And there’s a lot we left out.”

“So, I’m not surprised they would like to see some omitted from our response,” he added.