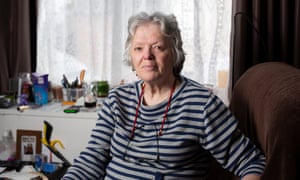 OBrien at her home in Wolverhampton. She said: My treatment by the Home Office was terrible. Photograph: Andrew Fox for the Guardian

She was puzzled by the Home Offices decision to target her. I did feel British. When I came to England, Canada was part of the Commonwealth. It was so simple. I went to the jobcentre, was issued with a national insurance and got a job. I was always in work, OBrien said.

By the time she retired, she was juggling three jobs. When she thought she might be deported, she remembered wondering whether she would get a refund of the money she had paid in taxes.

OBriens life savings were eaten up during the period that she was without money, and she had to rely on her children.

Her case worker at the Refugee and Migrant Centre, Daniel Ashwell, helped her find an indefinite leave to remain stamp in her expired Canadian passport that instantly proved she was in the UK legally. She had never noticed it, or realised its significance, and was profoundly grateful for his help.

After the Home Office received this evidence, her right to be in the UK was confirmed and her benefits were paid.

My treatment by the Home Office was terrible. I felt like dirt, she said.

Ashwell said: The case of Ms OBrien is a stark example of the consequences of the hostile environment experienced by many of our clients. The case demonstrates the way in which immigration policy has encouraged Home Office officials to treat those going through the immigration system with distrust and a lack of human dignity.

In an emailed statement, the Home Office said: The new dedicated team helping the Windrush generation will be on hand to assist undocumented long-resident Commonwealth citizens.