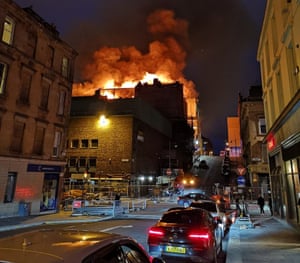 Alan Dunlop, the schools professor of architecture, said: The building does look as though from the inside its been totally gutted. All that seems to remain is the stone walls.

The damage to the buildings stonework

raises questions about whether the structure will survive this second round of intense heat.

In the last fire, the stonework endured temperatures of up to 1,000C and was then cooled down very quickly by water, leaving some of the stone cracked and and too weak to reuse.

The building was designed by the art nouveau architect and designer Charles Rennie Mackintosh, whose designs extended to the smallest detail, including its furniture, lamps and glass inlays.

Its most famous feature was its library, which housed many rare and archival materials as well as original furniture and fittings, and was gutted by the first fire.

The city celebrated the 150th anniversary of Mackintoshs birth last week, when one of his other famous buildings, the Willow Tea Rooms nearby, reopened after a refurbishment.

Students at the school had their graduation ceremony on Friday, said Jane Sutherland, the chair of the local community council and an artist who graduated from the school in 1982.

She said she witnessed the fire from her flat and saw the start of the blaze in 2014. This time around I feel numb, like ice, legs like jelly, Sutherland said. The fire was immense. People were dodging fist-sized flaming embers last night. All the neighbours were out; we were all worried all the roofs were going up. This area is full of architectural gems.

It was terrifying last night. The smell of it and you could feel the heat of it two blocks away.

She said the firefighters had been heroic. They fought with their lives for that building; they did the last time and they have again.

Margaret Archbold, who studied sculpture at the art school in the early nineties, said that she was relieved to see some stone left from her vantage point at the police cordon in Hill Street.

It should have been the safest building in Glasgow, she said. Its so ironic that all that money was put back in to restoring the building and celebrating the Mackintosh anniversary. Its devastating to see when you know whats in that building.

Another witness, Aidan Dick, said the fire and smoke grew in intensity in the space of a few minutes. He tweeted: Glasgow School of Art is on fire again. Heartbreaking. My thoughts go to all students and staff, and I hope no one was caught in the blaze.

The 2014 fire began when flammable gases from a foam canister used in a student project were ignited accidentally. A report by the SFRS concluded that old ventilation ducts helped it spread into neighbouring studios and upwards through the building.