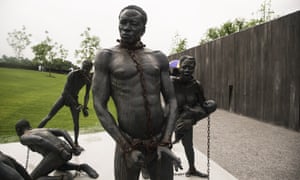 A sculpture depicting the slave trade at the entrance of the National Memorial for Peace And Justice. Photograph: Bob Miller/Getty Images

Seated at the front porch of the First White House on a sunny morning, curator Bob Wieland said he supported the Legacy Museum, but felt strongly that Confederate landmarks be preserved, especially as the city is changing and the sleepy old cotton south falls away. That means, he said, keeping this museum [the First White House] just to have a positive taste, an old south taste, as the new comes up.

Asked about criticismsthat the state-funded First White House whitewashes the evils of slavery, Wieland said, We could certainly tone down the celebration [of Davis] , but it is part of civil war history. Discussing the lack of references to slavery, he said the museum was more of a political military history than a social history.

While some of the most vocal Alabama defenders of Confederate monuments said they broadly backed the concept of a lynching memorial, they also expressed anxiety about its impact, some reverting to racist stereotypes of African American rioters.

Bring that stuff to light, and let it be there, but dont dwell on it, said Tommy Rhodes, a member of the Alabama Sons of Confederate Veterans. We have moved past it You dont want to entice them and feed any fuel to the fire.

Randall Hughey, another member who also owns a local radio station, emphasized his support of the museum but also repeatedly questioned the veracity of its facts.

They have every right to have the memorial, if its accurate, he said, adding that he was perplexed by reports of more than 4,000 lynchings. That seems pretty incredible to me that there would be that many documented lynchings That was not the norm.

Equal Justice Initiative, the group behind the memorial and lynching data, did six years of research and made extensive visits to southern sites.

Mary Massey, a 58-year-old nurse on her way to lunch in Montgomery, expressed disdain at the project: We didnt have nothing to do with that. I think they just need to leave it alone. Its just stirring up something.