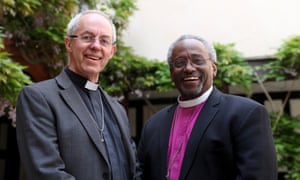 Reading from his iPad, gesticulating, swinging his robes, smiling, rocking back and forth on his feet, Curry was in complete contrast to the solemn and stationary ecclesiastical address that preceded his. Where there was stillness, now there was movement. For 14 minutes he preached in the full-throated, uninhibited, theatrical and emotive style of the traditional African-American church. He preached of Moses and Jesus of Nazareth, the Hebrew scriptures and the old slaves in Americas antebellum South who recognised in their singing of spirituals, even in the midst of their captivity, that there is a balm in Gilead to make the wounded whole. Quoting from Martin Luther King to begin and end the speech, this was not something ever witnessed within the lofty walls of the pinnacle of the Anglican establishment at a royal wedding. This was a speech that could have been lifted straight out of the pages of James Baldwin or ZZ Packer.

An ardent campaigner for social justice, particularly on immigration and same-sex marriage, Chicago-born Curry, himself a descendent of slaves, did not tone down his passionate message of the social and political power of love in order to align with the reserve of his pale and stately onlookers. He did not filter. He did it black, with music in his arms, and rhythm in his voice, and a looseness and openness in his face that supposed an almost familial acquaintance with his audience.

In his world, words do not travel alone from the mouth, with just their letters and their grammar for company. Here the body comes too, giving life to the words, lifting them into the air to float and dance into comprehension and human feeling. For Zara Tindall, captured open-mouthed in her pricey, shiny teal in the pews, it was something to behold.

The expressions on the faces of the congregation around the church were also something to behold, ranging from empathy to bemusement to confusion to downright scorn. Four minutes in, Camilla Parker Bowless ludicrous hat was trembling as she held down her head: was she laughing? Prince Charles was also bowed, red around the ears, more so than usual: was he?

There was half a smirk at the Duchess of Cambridges mouth, and, when Curry exclaimed: Oh thats the balm in Gilead!, throwing up his hands in emphasis, the Queen straightened in her chair, purse-lipped. Meanwhile, Oprah swayed. Ragland looked steadily on, a little sadly, as if aware of something of which others were not, yet also with an innate sweetness; while her daughter sat holding hands with her prince, occasionally conferring in love-soaked whispers.

It was a sermon that will go down in history as a moment when the enduring seat of colonialism was brought before the Lord, and questioned in its own house. In the mention of slavery was the inherent accusation of white silver-spoon complicity, and that this union should not go forth without acknowledging it.

Love is the way, Curry chanted, in a rolling, conversational repetition borne of the deep south. When love is the way, we actually treat each other, well he put his hand on his hip and his elbow on the lectern like we are actually a family. A utopia for our time indeed, delivered with a grand humility apparently wasted on some of its listeners, who were not quite expecting such blackness from a black bride.