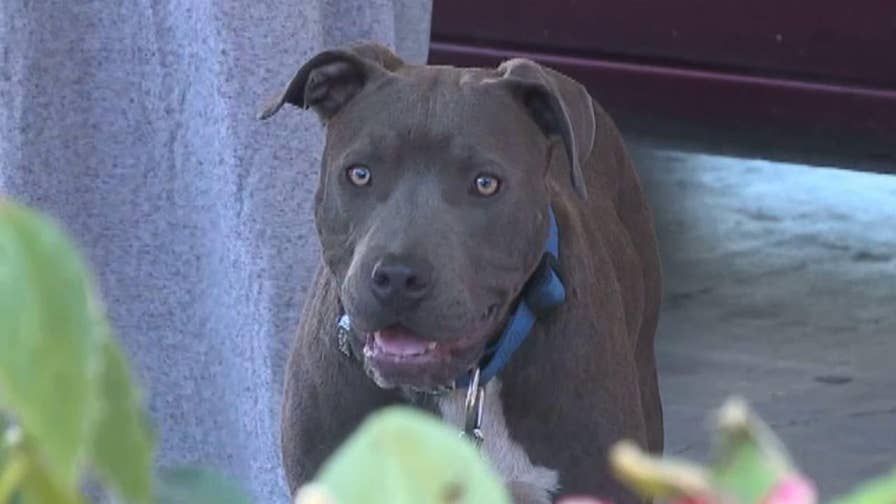 Sasha the eight-month-old pit bull alerted her family to the fire next door.

An 8-month-old pit bull in California is being hailed a hero after she alerted her family of a fire in their apartment complex – and then saved their 7-month-old daughter by pulling her by her diaper.

When flames broke out at the apparent complex where Nana Chaichanhda lives in Stockton, Calif., her pup Sasha, who was outside, quickly jumped to action, and “began to bang on the back door.”

“I open it and she runs in and starts barking at me like crazy and I was like, ‘OK, this is weird. This is not like her,’” Chaichanhda told FOX40.

After seeing the flames begin to ravage part of the apartment complex, Chaichanhda went to get her 7-month-old daughter. When she entered the room, however, Sasha was already trying save the young girl.

8-month-old pit bull Sasha is being hailed a hero by her family after the pup alerted them that the home next door was on fire early Sunday morning. Hear from the family at 5 on @FOX40pic.twitter.com/yzZTQSm3Dn

“She had already had my baby by the diaper and was dragging her off the bed,” she told FOX40. “I was like, ‘Oh my gosh, what are you doing?’”

Thanks to Sasha, the family made it out of the apartment unharmed. But the damage from the fire has left Chaichanhda’s apartment uninhabitable, according to FOX40

For the time being, Chaichanhda, her baby, Sasha, as well as her cousin whose apartment was also impacted by the flames, are staying with an aunt who also lives in part of the complex that was not affected by the fire.

The Stockton Fire Department told FOX40 that they are still investigating the cause of the fire.

“It meant a lot. I owe her everything,” Chaichanhda said of Sasha. “If it wasn’t for her, I would have still been in bed and things could have taken a worse turn.”