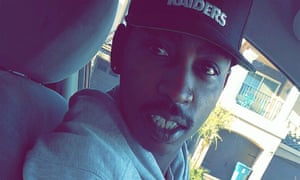 A photo of Diante Yarber provided by the mother of his 19-month-old daughter. Photograph: Courtesy Brittany Chandler

Lee Merritt, an attorney for the family, said Yarber, who was known by the nickname Butchie, was not armed and that the car posed no danger to officers when they began spraying him with bullets.

They saw a car full of black people sitting in front of a Walmart, and they decided that was suspicious, said Merritt. They just began pouring bullets Its irresponsible. Its dangerous. Its mind-boggling, the use of force.

A police spokeswoman said involved officers were on paid administrative leave, but declined to disclose the number of bullets shot and officers who fired. Police labeled the incident an assault on an officer, but Dale Galipo, an attorney representing the 23-year-old woman hit in the car, said the investigation so far has revealed Yarber was unarmed and that officers were not in the path of the vehicle, which means they should never have discharged their weapons, let alone fire a barrage of bullets.

Galipo said his client was struck by at least two shots and suffered serious injuries, adding, Shes still in a state of shock.

Yarber was also driving his cousins car at the time, which was never reported stolen, said Aleta Yarber, Diantes aunt, who said she has since retrieved the car and that it did not appear it had rammed into police vehicles. Police did not respond to inquiries about the claims that Yarber was a car theft suspect.

Aletas son was in the car at the time of the shooting, but the bullets missed him. In the weeks since, He has not been able to say much of anything, she said. It was very traumatizing.

Merritt said he believed Yarber was trying to shield others in the car from bullets when he was hit, adding that the 23-year-old woman in the back was initially placed in a police car and treated like a suspect before officers got her medical attention.

Ruby Hawkins, Yarbers sister, said local police often harassed her brother and that the officers should face criminal charges for killing him. They are the biggest criminals. They are bullies with badges I dont know how you can fear for your life with a person that is moving away from you.