President Donald Trump condemned as “disgraceful” an FBI raid on the office and hotel room of his longtime lawyer and fixer Michael Cohen, who paid $130,000 to an adult-film actress and who has been a key figure in the U.S. investigation into Russian election meddling.

Trump, speaking Monday to reporters at the White House, defended Cohen as a “good man” and blasted Special Counsel Robert Mueller’s probe as “an attack on our country, in a true sense.” The president said agents “broke into” Cohen’s office in midtown Manhattan, even though a federal judge had to approve the search warrants used by the FBI.

FBI agents seized documents using several warrants after the case was referred in part by Mueller to New York federal prosecutors, Cohen attorney Stephen Ryan wrote in an email. The Washington Post reported that Cohen is being investigated for possible bank fraud and campaign finance violations. 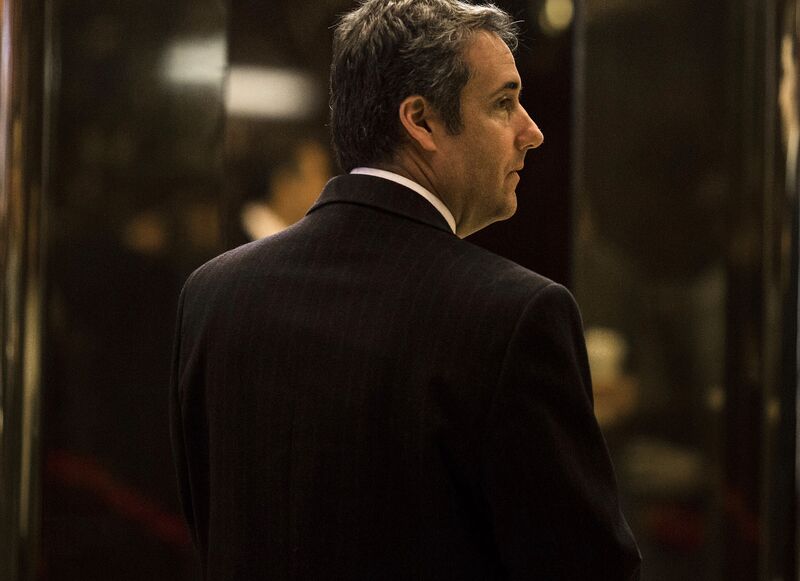 “It’s an attack on what we all stand for,” Trump said.

The president said it was a “terrible mistake” for Attorney General Jeff Sessions to recuse himself from Mueller’s investigation of Russian meddling in the 2016 election. The referral to the U.S. attorney in the Southern District of New York was approved by Deputy Attorney General Rod Rosenstein, according to a person familiar with the situation.

Cohen, a longtime lawyer for the Trump Organization, paid $130,000 to Stephanie Clifford, an adult film actress known as Stormy Daniels. She has said Cohen paid her to keep quiet about having sex with Trump in 2006, the year after he married Melania Trump. Cohen said he made the payment without Trump’s knowledge, using his own money.

Trump said last week that he was unaware of any payment by Cohen to Clifford just before the presidential election in 2016. Clifford has sued Cohen and Trump in federal court in Los Angeles, seeking a ruling that the “hush agreement” she signed in October 2016 was never valid because Trump didn’t sign it.

The FBI raid was reported earlier by the New York Times. Agents raided the office, home and a Manhattan hotel room of Cohen, the Wall Street Journal reported. Agents were still at the site of Cohen’s office at Rockefeller Center in midtown Manhattan late Monday afternoon, a worker there said. He had an office there in the space of Squire Patton Boggs, but they’ve ended their agreement, the firm said in a statement.

“We have been in contact with federal authorities regarding their execution of a warrant relating to Mr. Cohen,” the firm said. “These activities do not relate to the firm and we are in full cooperation.”

Ryan said the use of search warrants was “completely inappropriate and unnecessary” because it resulted in the seizure of material protected by attorney-client privilege.

“Those government tactics are also wrong because Mr. Cohen has cooperated completely with all government entities, including providing thousands of non-privileged documents to the Congress and sitting for depositions under oath,” according to Ryan.

Mueller brought information involving Cohen to Rosenstein, who decided that the inquiry should be handled by federal prosecutors in New York, according to a person familiar with the situation.

Under Justice Department regulations, Mueller must consult with Rosenstein about how to handle evidence and matters that may fall outside his jurisdiction. Mueller is investigating Russian meddling in the 2016 U.S. presidential campaign, whether anyone close to Trump engaged in collusion and whether Trump sought to obstruct justice.

Michael Avenatti, a lawyer for Daniels, said in an email that Cohen “has been placed in the crosshairs by Mr. Trump. He has been set up to take the fall.”

Cohen has denied any collusion with Russia. He was questioned by congressional investigators last year over his connection to Russia, including a proposed deal to build a Trump Tower in Moscow.

The Trump Organization solicited building designs from architects and engaged in preliminary financing discussions. But the project ultimately fizzled, and Trump wasn’t involved in the decision to abandon it, Cohen said. The discussions, which continued into the 2016 campaign, were about a “real estate deal and nothing more,” Cohen said.

In his statement, Ryan said the FBI raid “resulted in the unnecessary seizure of protected attorney-client communications between a lawyer and his clients.”

Under Justice Department guidelines, prosecutors must consider alternatives to search warrants by using the “least intrusive approach” to gathering evidence from an attorney’s office. Raids need high-level approval at the department.

To avoid such a danger, the Justice Department creates a “taint team” of lawyers not involved in the case to review records and decide which ones shouldn’t be seen by prosecutors on the case.

The raid suggests Mueller may have documents that call into question the credibility of Trump and Cohen, even if the materials have nothing to do with Russian meddling, said Jeffrey Cohen, a New York family law attorney who’s not involved in the case and isn’t related to Michael Cohen.

“Someone had to have fed Mueller information to make him believe that either Trump and/or Cohen were not being honest in the statements they’ve made publicly,” Cohen said. “It could only have to do with lying.”