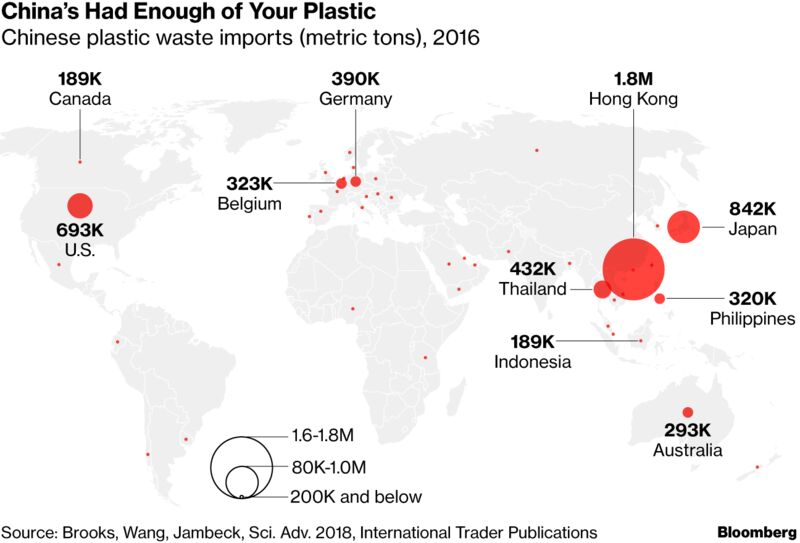 Few people consider used plastic to be a valuable global commodity. Yet China has imported 106 million tons of old bags, bottles, wrappers and containers worth $57.6 billion since 1992, the first year it disclosed data. So when the country announced last year that it finally had enough of everybody else’s junk, governments the world over knew they had a problem. They just didn’t know exactly how large it was.

Now they know. By 2030, an estimated 111 million metric tons of used plastic will need to be buried or recycled somewhere else—or not manufactured at all. That’s the conclusion of a new analysis of UN global trade data by University of Georgia researchers.

Everyone’s bottles, bags and food packages add up. Factories have churned out a cumulative 8.3 billion metric tons of new plastic as of 2017, the same Georgia team reported last year. Even 1 million metric tons, the scale that this material trafficks in every year, is hard to visualize in the abstract. It’s 621,000 Tesla Model 3s. It’s 39 million bushels of corn kernels. The world’s 700 million iPhones make up roughly a tenth of a million metric tons.

Nearly four-fifths of all that plastic has been thrown into landfills or the environment. A tenth of it has been burned. Several million tons reach oceans every year, sullying beaches and poisoning vast reaches of the northern Pacific. Just 9 percent of the total plastic ever generated has been recycled. China took in just over half the annual total in 2016, or 7.4 million metric tons.

As the industry matured and the negative effects on public health and the environment became clear, China got more selective about the materials it was willing to buy. A “Green Fence” law enacted in 2013 kept out materials mixed with food, metals or other contaminants. Exports consequently dropped off from 2012 to 2013, a trend that continued until last year, when the world’s biggest buyer warned that its scrap plastic purchases would stop altogether.

Other nations, such as India, Vietnam and Malaysia, have taken in more plastic, although with an appetite smaller than China’s. Vietnam recently suspended imports as ships clogged its ports.

The world’s plastic problem has been building for decades. Since mass production began in the early 1950s, annual output has grown from about 2 million tons to 322 million produced in 2015, the authors said. Current production rates are exceeding our ability to dispose of the stuff effectively—and supply is expected only to grow. “Without bold new ideas and management strategies, current recycling rates will no longer be met, and ambitious goals and timelines for future recycling growth will be insurmountable,” they wrote.