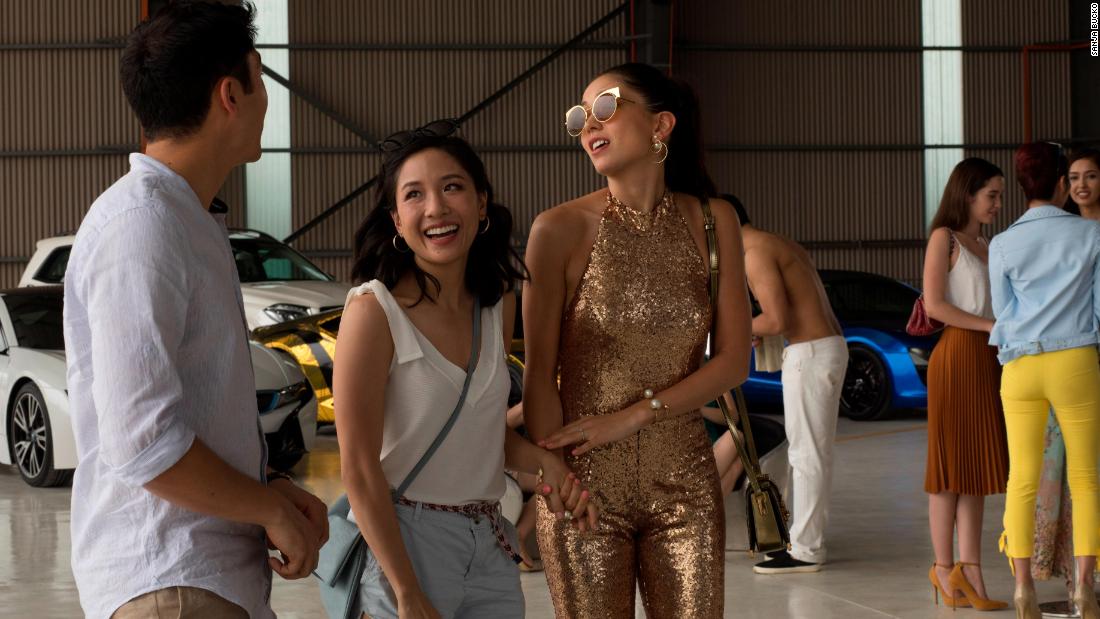 (CNN)“Crazy Rich Asians” understandably feels like an occasion — a big, colorful coming-out party for Asian (and especially Asian-American) talent. Set aside the cultural significance, though, and director Jon M. Chu has delivered a highly satisfying, decidedly old-fashioned romantic comedy, garnished with soapy elements and enough mouth-watering shots of food to inspire a big meal before or after.

Somehow, Nick has managed to shield Rachel from the fact that he’s the heir to one of Singapore’s wealthiest families, and thus a kind of royalty. So she’s in for a rude awakening when she accompanies him on a trip home for his best friend’s wedding, meeting his extended, eccentric relatives as part of the bargain.

“His parents can’t not like me, right?” she asks before they leave.

Based on Rachel’s resume, one would think not. But that’s before she encounters the tradition-bound Youngs, amid a whirlwind trip filled with plenty of detours, most designed to show off Singapore (the tourism bureau should be over the moon), delectable dishes and dazzling opulence.

That includes not just the old-money trappings that the Youngs embody, but also Rachel’s irrepressible college friend Peik Lin (Awkwafina, having a moment after her “Ocean’s 8” role) and her nouveau-riche family, offering Ken Jeong a chance to join the festivities.

In terms of recent movies, “Crazy Rich Asians” has a bit in common with “Fifty Shades of Grey,” to the extent that Rachel falls for a super-rich guy with a high degree of difficulty built into the relationship — there, his dominant-submissive appetites; here, his disapproving mom and the prying eyes of those encircling them.

Thanks to Kwan’s book, though, Chu and writers Peter Chiarelli and Adele Lim have a rich assortment of characters to mine, and the latitude to flesh out the central romance with subplots like the strained marriage of Nick’s cousin Astrid (“Humans” star Gemma Chan). Moreover, that’s all set against a lavish backdrop of parties, dinners and eventually the wedding — accompanied, cleverly, by Chinese versions of pop tunes like Madonna’s “Material Girl.”

Wu provides a perfect surrogate for the audience in her wide-eyed reaction to it all, able to pull off the Cinderella riffs while exhibiting the grit to weather being reluctantly placed under the microscope. Yeoh, meanwhile, speaks volumes with just a withering stare that packs as much punch as any of her action roles.

Of course, because of Hollywood’s shoddy history with Asian actors, the movie’s mere existence is being heralded as a breakthrough. After stereotypes, best-friend roles and white actors playing lead Asian characters, seeing a major U.S. studio throw its resources behind a film with a virtually all-Asian cast brings with it an added dimension of trailblazing scrutiny.

That’s a lot of baggage, but like almost everything else in this meticulously appointed film, “Crazy Rich Asians” wears it well. And while those who know a bit about Chinese culture will recognize that the review embargo corresponds with an auspicious date, by crafting such a broadly appealing movie, the filmmakers have seemingly made their own luck.