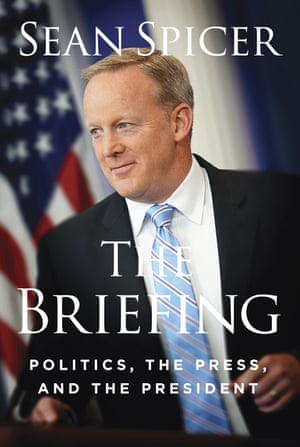 But in the book Spicer portrays Manafort as having an important and impactful role.

Paul brought a much-needed maturity to the Trump campaign when it needed an experienced political professional operative more than anything else, Spicer writes of Manaforts hiring in the spring of 2016. There was no semblance of a campaign structure, just a few, distraught, overworked people constantly barking into their phones. Paul immediately set up and staffed the political and communications operations necessary to take on the Clinton machine.

The Manafort message was clear: Trump will be our nominee and our next president, and anyone who didnt want to work to that end could spend the next four years in political Siberia. (No Russia pun intended.)

Manafort resigned as Trump campaign chairman in August 2016, after the national spotlight focused on undeclared payments that he had received for work in the former Soviet bloc. He was jailed last month as he awaits trial on charges of money laundering, tax fraud, failure to register as a foreign agent and obstruction of justice. Manafort has denied all wrongdoing.

Elsewhere in the book, the reader finds out what really was happening behind the scenes when Spicer, now a Fox News commentator with a podcast and an Instagram, attacked the press for pointing out the small size of Trumps inauguration day crowd; when Spicer first saw Melissa McCarthys impression of him on Saturday Night Live; when Spicer denied that Adolf Hitler used chemical weapons; when Anthony Scaramucci was appointed as Spicers boss; when Spicer was excluded from a papal audience; when Spicer allegedly hid in the White House bushes on the night of James Comeys firing (didnt happen, Spicer says); and when Trumps Access Hollywood Grab em by the pussy tape emerged.

I was surprised by how many women who contacted me did not consider Trumps comments a big deal, Spicer writes of the latter episode. One prominent Republican woman told me, You all talk like this; we know it. (Actually, we men dont all talk like this, but I held my tongue.)

Spicer, whose six-month stint as White House press secretary lasted only one month longer than Manaforts job with the Trump campaign, loads his memoir with painstakingly thorough descriptions of his own intensively incremental career calculations.

I had talked to White House chief of staff Reince Priebus and chief strategist Steve Bannon about me stepping away from the podium and taking a more strategic role, Spicer writes at one stage, which I thought better suited my talents.

But Spicers admiration for Trump shines through all of his reflections on the frustrations of the job. While Spicer in one passage applies the words erratic and mercurial to the president, the book which begins with a scene of Trump determinedly refusing Spicers resignation is filled with emotionally charged passages starring the president. (The book also includes an eloquent passage in which Spicer writes about the tragic loss of his father to cancer during the presidential transition.)

After what he judged to be a particularly strong early outing as press secretary, Spicer rushes back to where Trump has been watching on television.

To my eternal surprise, he rose up and gave me a bear hug, Spicer writes. Thats my Sean. Good job, he said. Right way to do it.

Spicer proudly recounts the story of lending the president a green tie for a meeting with the Irish taoiseach and not getting the tie back. He lards on the praise for the presidents political skills.

I dont think we will ever again see a candidate like Donald Trump, Spicer writes. His high-wire act is one that few could ever follow. He is a unicorn, riding a unicorn over a rainbow. His verbal bluntness involves risks that few candidates would dare take. His ability to pivot from a seemingly career-ending moment to a furious assault on his opponents is a talent few politicians can muster.

But an early episode in Spicers time as press secretary almost ruined his relationship with Trump. On the day after the inauguration, Trump, who had been watching TV coverage of his small inauguration crowd size, called up Spicer, who writes:

Sean, have you seen the news? The president was clear: this needed to be addressed now … I assumed that was the approach the president would want to see again: strong, aggressive, no questions. I was wrong.

In a hastily convened press briefing, Spicer attacked the media as biased and dismissed photographs that showed Barack Obamas inauguration crowd as having been much bigger than Trumps.

This was the largest audience to ever witness an inauguration period both in person and around the globe, Spicer insisted at the time and in his book, he refuses to back down from the assertion, claiming there was some enormous international online streaming audience.

But his audience of one thought Spicer had botched it, he writes:

I went back to my office, expecting an attaboy from the president; instead Reince was waiting for me and said the president wasnt happy at all with how I had performed. He didnt like my not taking questions. He thought I was hung up on the wrong issues. He wanted to know why I hadnt run my statement by him. Minutes later, the president himself called, and he was not pleased. And I started to wonder if my first day would be my last …

I had made a bad first impression, and looking back, that was the beginning of the end.

The moment spawned what may be the most indelible popular image of Spicer, the impression of him on Saturday Night Live as a pugnacious, mendacious pulverizer of chewing gum.

Taking a deep breath, I went to the DVR and saw Melissa McCarthy wearing my suit, downing gum by the bucket (guilty as charged, but never at the lectern), and yelling at the media, Spicer writes of watching the skit. I had no choice but to laugh.

Spicer handed in his resignation after the flamboyant former Wall Streeter Scaramucci, whose personality Spicer describes as pungent, was hired as communications director.

Lest any reader come away with the impression of Spicer as a prisoner to his affection for the president, or as clinging too eagerly to scraps of a frankly fairly brief past, he closes his book with a declaration of independence.

I spent my career in service to powerful people, always in a supporting role to someone else who played the part of the principal a member of Congress, an RNC chairman, a president of the United States, writes Spicer.

Now I was my own principal. Now, at last, I was free to be my own man.

PrevPreviousBuild-A-Bear closes lines for ‘Pay Your Age’ sale at US stores amid chaos – Trending Stuff
NextRidiculed for his theatrics, where does the Brazilian go from here? – Trending StuffNext