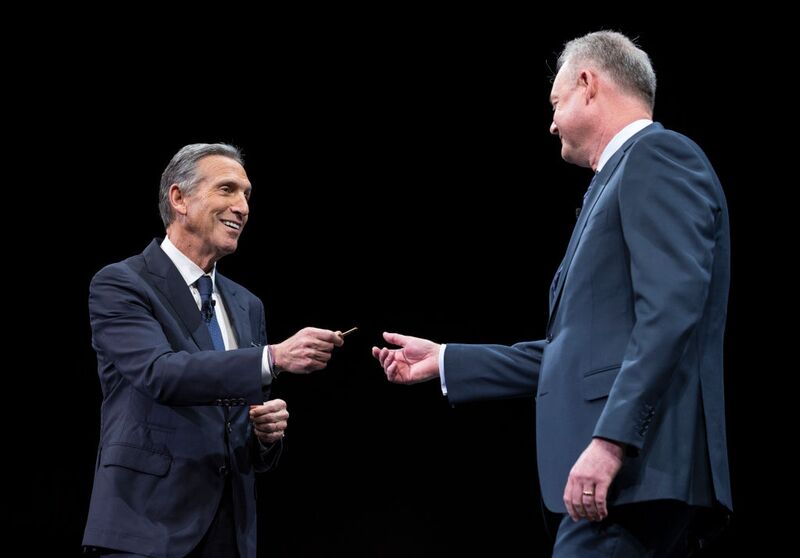 Americans’ long-running joke about a Starbucks on every corner may be nearing its end.

The coffee behemoth is retrenching in its home market as it contends with sales growth that Chief Executive Officer Kevin Johnson acknowledges isn’t fast enough. The cafe chain said Tuesday it expects comparable sales to rise just 1 percent globally for the current quarter—the worst performance in about nine years. That’s well below the 2.9 percent analysts were expecting, according to Consensus Metrix.

Starbucks also plans to close about 150 company-operated stores in densely penetrated U.S. markets next fiscal year, three times the number it historically shuts down annually. Shares initially slid as much as 6.3 percent in late trading Tuesday before inching back up. The stock was down 1.6 percent as of 5:24 p.m. in New York.

“Our growth has slowed a bit,” Johnson said in an interview. “I expect better, I think our shareholders deserve better, and we’re committed to address that.”

Although business abroad has been booming and the chain has been opening more and more cafes, U.S. sales growth has stalled for the company that brought espresso to the masses. With about 14,000 stores domestically, Starbucks is now pumping the brakes on licensed and company-operated locations, with a renewed focus on rural and suburban areas—not over-caffeinated urban neighborhoods where locals already joke that the next Starbucks will open inside an existing store.

The closing stores are often in “major metro areas where increases in wage and occupancy and other regulatory requirements” are making them unprofitable, Johnson said. “Now, in a lot of ways, it’s middle America and the South that presents an opportunity.”

For the ubiquitous chain, moving slower and shutting unprofitable stores may trigger some deja vu. In 2008, longtime leader Howard Schultz returned to the company that was struggling after expanding too quickly across the U.S., giving competitors like McDonald’s Corp. a chance to elbow back into breakfast. Investors cheered as Schultz retook the helm and closed some underperforming stores, and share prices at the chain have been up eight of the last 10 years. So far this year through Tuesday’s close, shares have been essentially flat.

But now, with Schultz stepping back from his beloved company, the task of the righting the ship will fall to Johnson, who took over as a CEO just over a year ago. Schultz, who had already transitioned away from running the coffee chain’s day-to-day operations, announced earlier this month he’d be leaving the company, fueling speculation he could be gearing up for a political career. Veteran retailing executive Myron Ullman is taking over as the new head of the board as Schultz departs.

While Schultz had been trying to expand the Seattle company’s premium business, dubbed Reserve, along with Italian bakery Princi, analysts have speculated that these may be put on the back burner under the new leadership. The company is also facing a resurgent McDonald’s, which has been advertising $2 cold-brew coffees, along with other steep discounts from fast-food rivals.

“The competitive environment has really become a lot stronger in the U.S. and a lot of that is the fast-food chains really improving the quality and breadth of their offerings in terms of hot beverages and breakfast,” said Bloomberg Intelligence analyst Jennifer Bartashus. Americans can “get that same flavor profile at a much lower price somewhere else. That becomes an area of concern for Starbucks.”

Starbucks has also faced backlash this spring after two black men were arrested at one of its stores in Philadelphia while waiting for a meeting to begin. The company and Johnson apologized, calling the arrests “reprehensible.” Last month, Starbucks closed about 8,000 cafes so its employees could undergo racial-bias training, which did hurt sales in the quarter, Johnson said. After stores reopened following the May 29 training, sales have started to rebound at U.S. locations, with the chain expecting domestic same-store sales growth of around 3 percent in June, according to the company.

The company now expects to report adjusted earnings of between $2.39 and $2.43 per share this fiscal year, down from an earlier forecast of $2.48 to $2.53, according to an investor presentation.

Starbucks says it can attract more diners in the U.S. with new menu items and will focus on its expanding tea business, as well as capitalizing on health and wellness trends. Starbucks just added a new mango-dragon fruit iced drink to its permanent menu in the U.S. and Canada. And it’s focused on improving its food lineup with sous vide egg bites, plus a new line of lunch salads and sandwiches that it’s expanding across the nation.

“We’re putting more of our energy into that afternoon day part and the portfolio of beverages that are offsetting some of the declines we’re seeing in Frappuccino beverages,” Johnson said, citing a consumer shift away from sugary drinks. The company is also preparing to “lean into more plant-based beverages,” he said, noting that a new plant-based protein cold-brew drink will be introduced this summer.

The chain is also relying on its digital initiatives to contribute between 1 and 2 percent to comparable sales next fiscal year. There’s going to be a new way for non-rewards customers to earn stars and rewards starting next spring, allowing visitors to cash in on loyalty without fully signing up.

Related: Free Food for Personal Data Is a Trade Some Diners Won’t Make

On Tuesday, Starbucks said that it will return more cash to shareholders—about $25 billion in buybacks and dividends through fiscal 2020, representing a $10 billion increase from the previous guidance. Additionally, it plans to cut general and administrative costs, and has hired a consultant to help in this area. It’s also exploring options to license some company-operated stores “in other appropriate markets,” it said.

The company earlier this year said the cash it got from a licensing deal with Nestle SA would go to support the company’s growth in the U.S. and China, where its expansion has been explosive. Starbucks plans to more than triple revenue in China in the next five years and open a new store every 15 hours through 2022 in that market. Johnson confirmed Tuesday that China may one day be a larger market for Starbucks than the U.S.

“The China market still offers a lot of potential,” Bartashus said. “But the current political environment with trade wars looming or the governments picking at each other—it definitely casts a shadow over the long-term prospects for large western brands that are in China.”