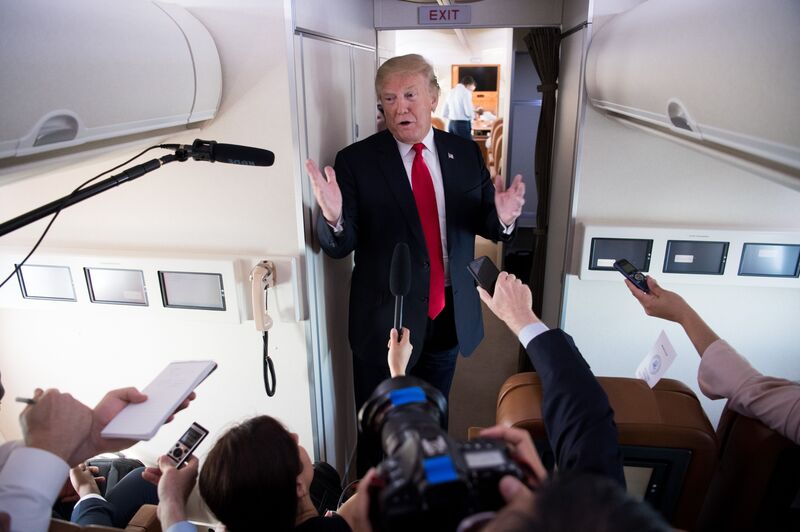 President Donald Trump spent Saturday engaged in a deep dive into the backgrounds of the top prospects to fill an opening on the U.S. Supreme Court but hasn’t begun interviews with the finalists.

Trump is at his Bedminster, New Jersey, private golf club. He’s been studying the rulings, judicial philosophies and temperaments of his short list, said an administration official familiar with the process.

Trump, who’s spending the weekend with family, had “extensive” conversations by phone with White House Counsel Don McGahn to seek additional insights on some of the likely finalists, said the official, who spoke on condition of anonymity to discuss the process.

While the president told reporters a day earlier that it was possible he would interview one or two candidates at Bedminster over the weekend, the official said that as of Saturday evening no presidential interviews with candidates had taken place, and that such meetings weren’t expected on Sunday either. Trump returns to the White House Sunday evening.

Trump said Friday he’d narrowed his search for a nominee to fill a Supreme Court vacancy to about five finalists, including two women, and will announce his pick on July 9.

“I like them all but I’ve got it down to about five,” Trump told reporters aboard Air Force One. In response to a question about Barrett, he called her “an outstanding woman.”

It isn’t clear what other woman might be on Trump’s short list. Trump said he may consider as many as seven candidates.

Trump’s time frame could prove optimistic. The FBI is still conducting background checks, the person said. But the president is already moving to get the process on a fast track. He met with a group of swing-state senators from both parties at the White House on Thursday to discuss the nomination, and his aides also spoke with more than a dozen other senators.

Trump said he’s not going to ask the candidates whether they’d vote to overturn the landmark 1973 Roe v. Wade abortion-rights ruling, a decades-long aspiration of the Republican Party.

“It’s a great group of intellectual talent,” Trump said, adding that the candidates are “generally conservative.”

The confirmation process promises to be a partisan brawl, but one where Republicans have most of the control over the clock. Trump aims to have a replacement for Kennedy confirmed in time to join the court for its new term in October, White House legislative affairs director Marc Short said Friday.

Republicans have a 51-49 majority in the Senate, and second-ranking Democrat Dick Durbin of Illinois said Thursday there is little Democrats can do to stop the nomination unless some Republicans defect. Virtually all Republican senators have supported Trump’s lower-court selections and most have spoken favorably about Trump’s list of candidates for the Supreme Court.

Senator Amy Klobuchar of Minnesota, a top Democrat on the Judiciary Committee, said that no matter who is chosen, confirmation will rest on the decisions of two GOP senators: Susan Collins of Maine and Lisa Murkowski of Alaska. Both have expressed support in the past for Roe v. Wade, and last year they displayed a willingness to split with their party when both voted to defeat the GOP Obamacare repeal effort.

Hardiman and Thapar were among the group interviewed by Trump before he selected Neil Gorsuch for a vacancy last year. Kethledge was also under consideration for that opening, though he didn’t get an interview with Trump.

Kavanaugh, 53, is a former Kennedy law clerk who serves on the federal appeals court in Washington and has been a source of controversy for two decades. He was a top deputy to independent counsel Ken Starr and drafted much of the report that led to President Bill Clinton’s impeachment.

Kethledge, 51 and from Michigan, is also a former Kennedy clerk, known for pointed opinions. He won praise from conservatives for voting against the Internal Revenue Service in a case involving a Tea Party group that claimed it was singled out for mistreatment on its application for tax-exempt status.

Barrett, who’s in her mid-40s, is a Trump appointee who serves on a federal appeals court in Indiana. During her Senate hearing, Democrats questioned the role her Catholic faith would play on the bench. Barrett’s supporters accused Democrats of imposing a religious test.

Thapar, 49, is also a Trump appointee. He was recommended for his current post by Senate Majority Leader Mitch McConnell, a fellow Kentuckian. Thapar, whose parents immigrated from India, would be the first Asian-American justice. McConnell said Saturday he had touted Thapar, but acknowledged he had “no idea” who Trump would choose, Associated Press reported.

Hardiman, who turns 53 on July 8, is a former cab driver who was the first in his family to graduate from college. He serves on a federal appeals court in Pennsylvania and has been a staunch supporter of gun rights.

Republican Senator Mike Lee of Utah isn’t among the leading candidates, the person familiar with the discussions said.