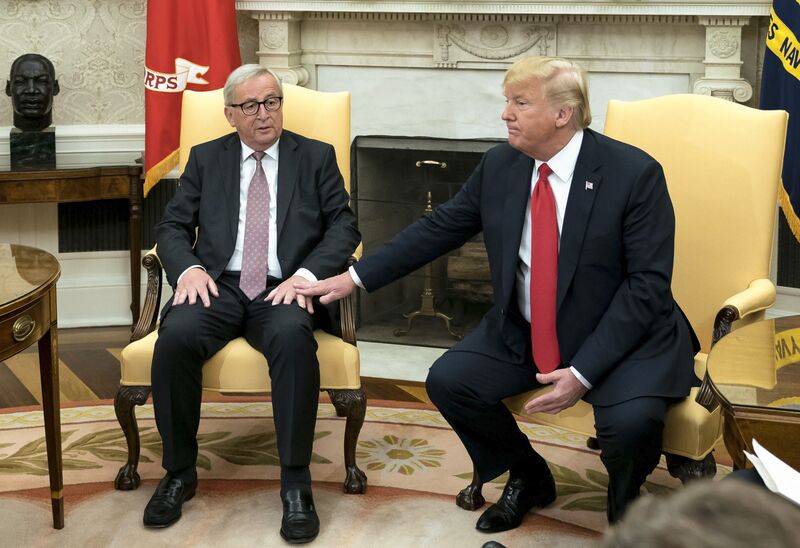 President Donald Trump and European Commission President Jean-Claude Juncker agreed to suspend new tariffs while negotiating over trade, pulling the U.S. and Europe back from the edge of a transatlantic trade war.

The leaders pledged to expand European imports of U.S. liquefied natural gas and soybeans and both vowed to lower industrial tariffs, excluding autos. The U.S. and European Union will “hold off on other tariffs”’ while negotiations proceed, as well as re-examine U.S. steel and aluminum tariffs and retaliatory duties imposed by the EU “in due course,” Juncker said.

“We had a big day, very big,” Trump said during a press conference with Juncker at the White House on Wednesday. “We are starting the negotiation right now, but we know where it is going.” Trump hailed “a new phase” of trade relations.

The deal eases tensions stoked by Trump’s threat to impose new tariffs on car imports. U.S. stocks and bond yields rose on signs of optimism that a U.S.-EU trade war could be avoided.

Trump added they would try to “resolve” steel and aluminum tariffs he imposed earlier this year and retaliatory duties the EU levied in response. The U.S. and EU will work together to reform the World Trade Organization, Trump said.

You Think GM’s Forecast Was Bad? Look What Auto Tariffs Would Do

Trump and Juncker took no questions after their brief remarks in the Rose Garden, an impromptu appearance scheduled after about three hours of talks.

Senator Rob Portman, an Ohio Republican, said he applauded the move to de-escalate tensions over tariffs.

“I’m glad. I think it’s going to help defuse some of the concern out there, not only in farm country but in our economy generally,” Portman said. “It’s a first step. We’ve still got to work out the details. But it’s been hard these last few weeks to see any light at the end of the tunnel,” with no signs of progress with the EU, Mexico, Canada or China.

The truce may prove to be short lived if the two sides can’t resolve their differences over trade in vehicles and car parts. In May, Trump abandoned a framework for trade negotiations with China within days of it being announced, before ratcheting up tariffs.

‘‘They sold it as something very positive, but for me the announcement is not as big for now, because it’s kind of a semi-truce,” Marie Kasperek, associate director of the global business and economics program at the Atlantic Council, said by phone. “As long as the steel and aluminum tariffs are ongoing, the EU will not negotiate on a high-level basis.”

Trump says a 10 percent tax on imports of cars to the EU is too high compared to the 2.5 percent rate charged by the U.S, and he’s also been critical of the EU over its $150 billion trade surplus with the U.S.

Still, the deal announced Wednesday with the EU is an encouraging sign that America’s trade partners may be able to placate the Trump administration with offers to buy more U.S. goods, averting a trade war that the International Monetary Fund has warned may undermine the strongest global upswing in years.

The Alliance of Automobile Manufacturers, a group of major automakers that includes General Motors Co. and Toyota Motor Corp., welcomed the effort to negotiate a solution that will lower trading barriers, rather than increase them.

“Today’s announcement demonstrates that bilateral negotiations are a more effective approach to resolving trade barriers, not increasing tariffs,” the alliance said in a statement.

Juncker came to Washington for a last-ditch bid to avoid U.S. tariffs on cars. He told reporters he entered Wednesday’s meeting with the intention of reaching an agreement with Trump.

“We agreed that no other tariffs would be introduced as long as we are in the negotiations,” Juncker said during a speech in Washington after his press conference with Trump. “I’m happy that we agreed to this agreement today.”

Trump warned at a cabinet meeting last week that he would move forward with 25 percent auto tariffs if the meeting with Juncker didn’t go well. Trump could impose car tariffs on national security grounds once Commerce Secretary Wilbur Ross completes a required investigation, which could come anytime before a deadline by early next year.

Auto tariffs at the level Trump has threatened would add about 10,000 euros ($11,700) to the sticker price of a European-built car sold in the U.S., according a European Commission assessment obtained by Bloomberg News last month. That would cut U.S. imports of European cars and car parts in half, the commission forecast.

(Updates with comment from the auto alliance from 11th paragraph.)