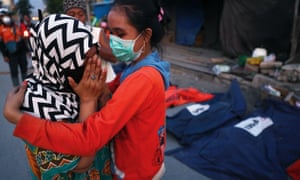 Women console each other after identifying the body of a relative in Balaroa village. Photograph: Athit Perawongmetha/Reuters

The logistics of responding to the disaster have been fraught with difficulty. Indonesia is an archipelago of more than 13,000 islands spread over more than 3,000 miles, and Sulawesi is in the countrys more remote east. The damage to Palus airport limited capacity to get supplies to where they were needed most.

Aid is now arriving, from Jakarta, neighbouring Borneo, Australia, Japan and the UK, but there were still reports of desperate residents in outskirt areas such as Sigi raiding passing cars for petrol and supplies. In Donggala earlier in the week, residents held out cardboard boxes to passing cars, placing planks of wood and rope across the road to force them to slow down.

In Palu, home to 300,000 people, some signs of normality are returning, but for some residents, such as Yaser Garibald, Palu will never be the same.

Yaser rushed to Balaroa on Friday night to search for his 60-year-old mother, Masri. He was unable to find her until the first light of dawn when he heard a faint voice coming from the rubble. She was wedged between two blocks of concrete with her arms wrapped around his nephew, Ririn, 23.

It hurts. Its hard to breathe, Masri told her son, as he hammered at the concrete in an attempt to free. In her last moments he was able to pass her water, but he was unable to save them.

Asked what kind of person she was, Yaser said he would remember his mothers final selfless act. When the earthquake struck she had made it out but then went back for her grandson. We dug her out and carried her away in a sarong, he said.