Washington (CNN)Sen. Kirsten Gillibrand entered the 2020 presidential race on Tuesday, telling Stephen Colbert that she was forming an exploratory committee just days before she heads to the critical state of Iowa.

Shortly after taping the show, Gillibrand officially filed with the Federal Election Commission and released her first campaign video, which highlighted her work on the 9/11 health bill, women’s rights and fighting President Donald Trump.
“I am not afraid of him,” Gillibrand said of the President.
The video opens by showing someone Googling the name “Kristen” — not “Kirsten” — a mistake often made regarding the New York senator.
Gillibrand, who was elected for her second full term in the Senate in 2018, rose to national prominence in recent years as a forceful proponent of the #MeToo movement and fierce critic of Trump. People close to Gillibrand have indicated the senator will run a campaign centered on gender issues, something she has championed in the House and Senate.
In her interview with Colbert, Gillibrand added, “You are never going to accomplish any of these things if you don’t take on the systems of power that make all of that impossible, which is taking on institutional racism, it is taking on the corruption and greed in Washington, taking on the special interests that write legislation in the dead of night. And I know that I have the compassion, the courage and the fearless determination to get that done.”
CNN reported earlier on Tuesday that Gillibrand intended to make her announcement to Colbert and had informed key supporters of her plans.
Although Gillibrand is forming an exploratory committee — something politicians often do to get more information on whether to run — Gillibrand told Colbert that there was no chance she wouldn’t run.
“It’s an important first step and it’s one that I’m taking because I’m going to run,” she said.
While it is certain that Gillibrand’s focus on Trump will continue during her campaign, the New York Democrat will have to get through a sizable field of Democrats considering a run for President, including a handful of her colleagues in the Senate. Sen. Elizabeth Warren of Massachusetts announced an exploratory committee last month and has traveled to Iowa and New Hampshire, while California Sen. Kamala Harris, New Jersey Sen. Cory Booker, Minnesota Sen. Amy Klobuchar and others are publicly considering a bid. 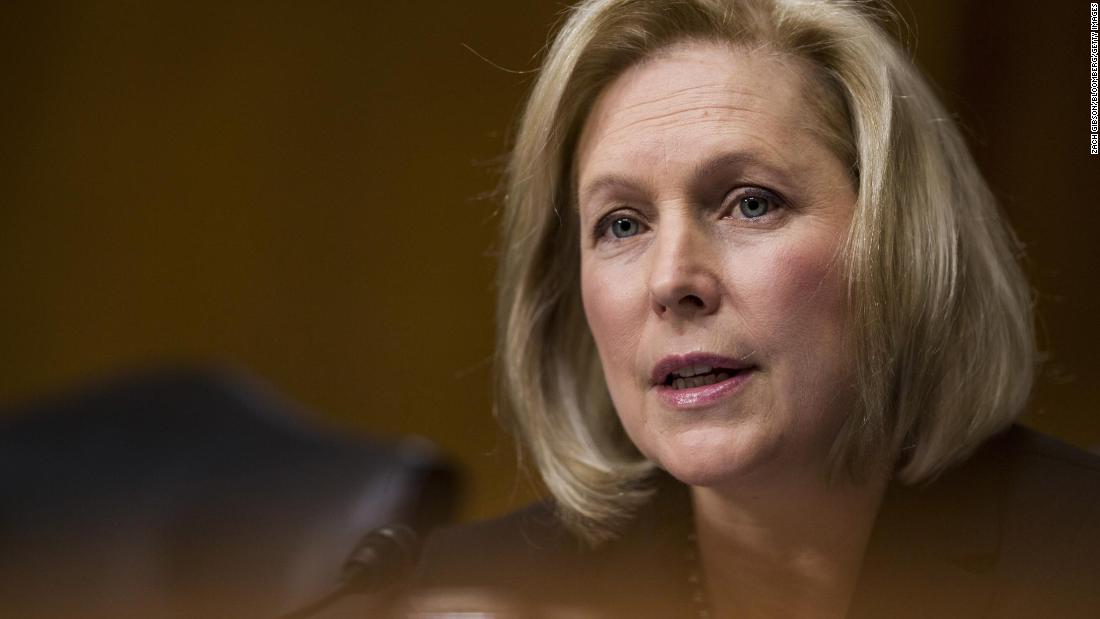 Democratic Rep. Tulsi Gabbard from Hawaii, former Secretary of Housing and Urban Development Julian Castro, former Maryland Rep. John Delaney, entrepreneur Andrew Yang and Richard Ojeda, a failed West Virginia congressional candidate, have all announced bids for the Democratic nomination.
A spokesperson for Gillibrand declined to comment on her plans.
Ahead of her trip to Iowa this weekend, Gillibrand has been calling top Iowa Democrats to pick up advice and discuss her upcoming trip, multiple sources in the state tell CNN.
Among them is Troy Price, the chair of the Iowa Democratic Party.
Price told CNN that he urged the New York Democrat to begin “laying the ground work” in the state and “show that she is ready to get to know people here.”
“Voters are ready to get to know her,” Price told CNN of Gillibrand. “So, I think it’s important for anyone who comes through to start thinking about those relationships because a caucus process is one where people want to get to know you” before they support you.
Gillibrand has already stacked her campaign with a number of top hires who were speaking with other contenders.
Jess Fassler, Gillibrand’s chief of staff, will work as the senator’s campaign manager. Fassler has been with Gillibrand since she was a House member representing upstate New York.
Dan McNally, formerly the political director at the Democratic Senatorial Campaign Committee, will work as Gillibrand’s campaign director. McNally, a longtime Democratic operative who managed Colorado Sen. Michael Bennet’s 2016 campaign, has worked at both the DSCC and Democratic Congressional Campaign Committee.
Meredith Kelly, the former communications director for the DCCC, will be the senator’s communications director. And Emmy Bengtson, digital director to Gavin Newsom’s successful California gubernatorial campaign last year and deputy social media director for Hillary Clinton in 2016, will work as Gillibrand’s deputy communications director.
Gillibrand, formerly a moderate Democrat in the House of Representatives, has shifted to more liberal positions since being appointed to Clinton’s Senate seat in 2009.
She is a vocal critic of Trump and has sparred with him on Twitter, the President’s favorite social media platform.
After Gillibrand called for Trump’s resignation after multiple women renewed their sexual misconduct allegations against him, Trump slammed the senator with language that Gillibrand called a “sexist smear.”
“Lightweight Senator Kirsten Gillibrand, a total flunky for Chuck Schumer and someone who would come to my office “begging” for campaign contributions not so long ago (and would do anything for them), is now in the ring fighting against Trump,” Trump tweeted in December 2017.
Gillibrand responded by calling the tweet a “a sexist smear intended to silence me.”
Gillibrand enters the 2020 field with $10.5 million in the bank, a sizable war chest that would make her one of the most financially formidable candidates.
While her most recent Senate run helped replenish her campaign coffers, it also provided opponents with a potential attack and a question Gillibrand has to answer: She promised voters in 2018 to serve her full term.
“I will serve my six-year term,” she said during a Senate debate when asked about her 2020 plans.
In 2017, Gillibrand ran afoul of some powerful Democratic donors after leading calls urging Minnesota Democrat Al Franken to resign from the Senate. Franken quit following allegations — one of which included photographic evidence — that he touched women inappropriately.
Some donors believed Franken, a popular lawmaker, was pushed out of office too quickly and could have weathered the controversy.
Addressing the criticism, Gillibrand told CNN’s Van Jones in December: “Sometimes you just have to do what’s right, even if it’s painful … if I can’t protect the women in my workspace, if I can’t — not only stand up for women who feel abused, or feel harassed in our workplace — then I’m not doing my job, and so I just got to a point where enough was enough.”
Around the same time that she came out against Franken, Gillibrand also said that in hindsight, former President Bill Clinton should have resigned because of his affair with then-White House intern Monica Lewinsky.
“Things have changed today, and I think under those circumstances there should be a very different reaction,” Gillibrand said in an interview with The New York Times. Asked if he should have resigned, she added, “Yes, I think that is the appropriate response.”
Republican National Committee spokesman Michael Ahrens told CNN in a statement, “If you looked up ‘political opportunism’ in the dictionary, Kirsten Gillibrand’s photo would be next to it. From jumping on the ‘abolish ICE’ bandwagon to turning on the Clintons, Gillibrand always goes where the political wind blows. Democrats know it, which is why she’s barely registering in the polls.”