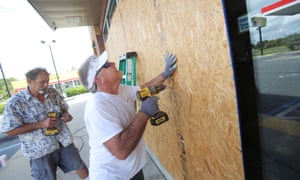 Hes acknowledging that were having sea level rise and stronger hurricanes but hes just not willing to say what the cause of it is, he said.

Florida is only just getting to 1% of our power generation from renewable energy, which means that 99% is dirty fuel. The little progress were making has little to do with Rick Scott, who has taken no leadership towards moving the state forward.

We havent seen any movement towards electric vehicles and electrification of Floridas transit system. And another example of his failure is his move towards building major road corridors across the state. Those cars would create sprawl and urban growth, which in turn means clear-cutting trees, adding cars thatll be traveling greater distances. That just increases the amount of carbon in the atmosphere.

Last year, the Tampa Bay Times questioned whether Scotts personal investments in the energy industry had helped shape the states lack of policies on climate change. The article claimed that chunks of the business-friendly governors $232m fortune were tied up with stock in petroleum and power-generating companies opposed to the restriction of greenhouse gases and other regulatory actions.

In an email to the Associated Press this month, his spokeswoman, Lauren Schenone, denied any conflict of interest.

Governor Scott has never made a single decision as governor with any thought or consideration of his personal finances, she wrote. The governors blind trust is managed by an independent financial professional who decides what assets are bought, sold or changed.

In an email to the Guardian, Schenone fiercely defended Scotts record on the environment.

Last year, she said, the Florida Department of Environmental Protection had a near-record high compliance rate, which means businesses and facilities are following the law and preventing environmental harm. [He] has also invested record amounts in Floridas environment, including hundreds of millions of dollars to help local communities transition from septic to sewer.

Scott continues to avoid talking about climate change on the campaign trail, often using the explanation Im not a scientist to dodge awkward questions.

His stance on environmental issues is laid out on his campaign website, which claims he has secured millions of dollars in state funds for local governments to plan and enact coastal defence strategies and combat sea level rise.

To Jackalone, such claims have no merit.

His lack of work on environmental protection has led to some major problems, he said. Our water quality continues to diminish, our algae blooms are becoming larger and more toxic and weve lost any semblance of growth management. He has been Floridas worst governor in decades with a head in the sand attitude to sea level rise.